There's no crying in bowling 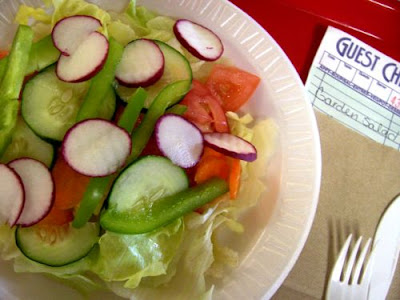 That is, unless you're a member of my family. It's just not a trip to the bowling alley without someone breaking down into tears, and this time was no exception. 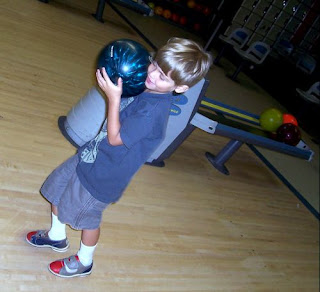 Last weekend was my nephew Colin's 4th birthday, and what did he want to do the most? Go bowling, of course (every time I have him in the car with me, he asks if he can go).

So yesterday, my dad took the boys (my son Jacob, Colin and his brother Cameron), my sister, yours truly and my grandfather to the local bowling alley for a day of fun (Jacob, Colin, my dad and I were the only ones actually in the game, although Cameron bowled a few of the boys' frames in the end).

Now you would think Colin, who is the youngest of the group, would have been the crier this time, but unfortunately for me, it was actually my son. 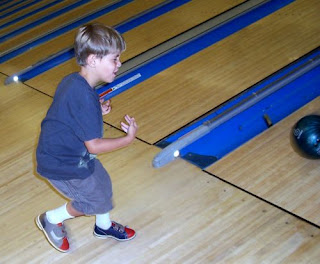 Jacob had never been bowling, unlike his 4-year-old cousin, who had been dozens of times. His only experience with the sport was either on the Wii or with lightweight toy pins (sometimes we've even used old tennis ball containers). So, you can understand how nervous I was about his first time rolling a real bowling ball down a long lane at pins that required a little more than a slight tap to fall down.

I was concerned. Would he be able to pick up a weighted ball? Could he figure out how to roll it down the lane? Would it make it to the end of the lane? How would he deal with not getting strikes and spares like he does so well in the video game version? 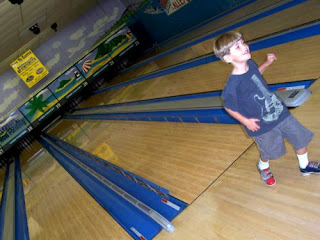 To my surprise, he picked up the ball like a pro and rolled it as if he had done it many times. He even pulled out some spares and gave me a run for my money at the end of the first game. He nearly beat me, if it wasn't for the fact that I somehow managed to get a strike and a spare in the last frame.

Okay, so maybe he had some help from the bumpers, but they sure didn't benefit my final score. It's been years since I had been bowling, and it showed. I also had the challenge of transitioning my skills back into the real world after my time spent virtual bowling with a Wii remote. Nothing beats the real deal. 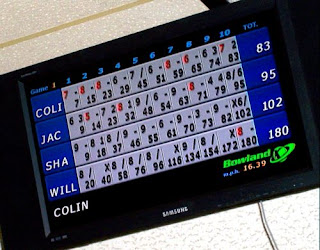 That reminds me; we saw the movie, "WALL-E" this week. It took place in the future, where people were out of shape, spending their days transported in levitating recliners and drinking all their meals from disposable cups (and I'm pretty sure they weren't green smoothies). It goes to show that if you don't move it, you lose it.

At the end of our first game, Jacob was the first to ask about playing a second round. However, not used to lifting that much weight, he was also the first to get tired, causing his melt-down in the fifth frame.

Luckily, it didn't last long, and after a couple frames filled in by designated bowler Cameron, Jacob dusted himself off and finished out the game. 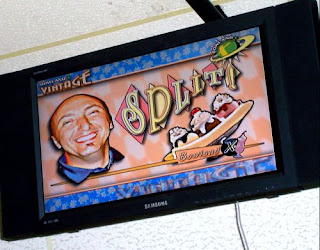 After all that weight-lifting, it was time to refuel. There wasn't much for the raw foodie amongst the hotdogs, burgers, subs, fries, popcorn, ice cream (Cameron thought I should take a picture of the "split" on the score board screen), etc., but somehow I managed to find a garden salad on the menu.

It was a few handfuls of iceberg lettuce, some green pepper strips, chunks of tomato and sliced cucumber and radishes served on a Styrofoam plate (I am totally not a fan of this material) with some plastic ware (sounds like we are well on our way to the garbage-covered Earth portrayed in the "WALL-E" movie. I really wish I had remembered to bring my To-Go Ware). 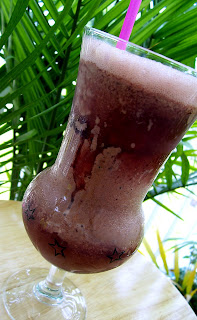 When I got home, I couldn't wait to have a frozen treat like the ones served up at the bowling alley snack bar. I had my mind set on a float (makes me think of this song my sister and her husband used as the soundtrack to one of our vacation videos), probably since my mom has talked about making them lately.

Now, I wasn't about to make a traditional float out of bottled root beer and milk/cream/sugar-based ice cream. Instead, I made my own cherry chocolate version out of my chocolate cherry n'ice cream and fresh cherry soda (sparkling water, cherries, agave and vanilla). Just like the original, mine also floats.

You can do the same thing with your favorite raw n'ice cream flavor and "soda" (check this root beer out on Gone Raw) or other raw beverage (Charissa makes hers extra thick with a milkshake base. Yum!). Enjoy :-)

Posted by shannonmarie at 11:52 AM

Oh I love bowling (even though I suck at it - LOL)! Great pics, girl.

Jacob looks soooo cute bowling!
I love the drink idea! Mmmm...cherries! I think I'l substitute Kombucha for the sparkling water. I've been craving Root Beer because my hubby drinks it like crazy, unfortunately. The raw version - it's gonna be so much better! Maybe I can convert his habit into a healthier one!

Kristen, I'm just like you. I have a lot of fun bowling, although I rarely get the highest score :-)

Thanks Rawleen. I make floats with kombucha, too. I love strawberry and grape. Glad to hear your hubby is willing to try a healthier version.