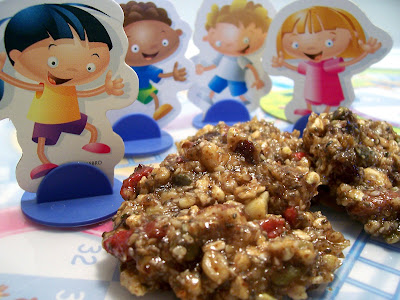 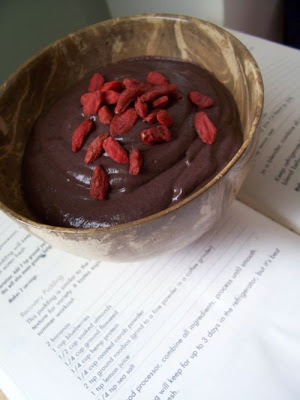 Since I've been increasing my raw intake again, I've noticed that my pregnancy cravings have died down. In fact, they've become almost nonexistent.

That is, until now. My cravings are returning, but lucky for me, they are healthy ones.

For instance, this a.m. I just had to have a bowl of Brendan Brazier's Recovery Pudding from his book, "The Thrive Diet" (you may recall me blogging about it in this past post). It really hit the spot on this surprisingly stormy morning.

I always find myself desiring heavier foods and more of them when it is cloudy out. I guess I just need the sunshine to keep my battery charged. Otherwise, I seem to need a little extra fuel in food form. 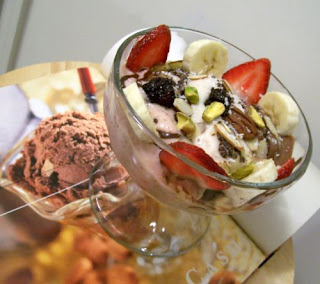 Actually, being pregnant, I've needed some extra food fuel anyway (those green breakfast smoothies just don't cut it on their own right now). I just try to make sure what I opt to put in my body is packed with nutrients my growing baby and I can really use.

Some of my other raw cravings have included fresh fruits and veggies, of course, as well as some simple kid-friendly treats (although she's not born yet, Hayden can still experience some of my childhood faves). I've been revisiting some simple yet fun recipes, like my no-bake kitchen sink cookies and a popular raw staple, frozen banana-based n'ice cream. Yum!

Which reminds me, I need to stock up the freezer with more bananas. Hey, where did they all go? Oh yeah, I think my boys (referring to my hubby and son) and I ate them all. I guess that's not really a bad thing :-) 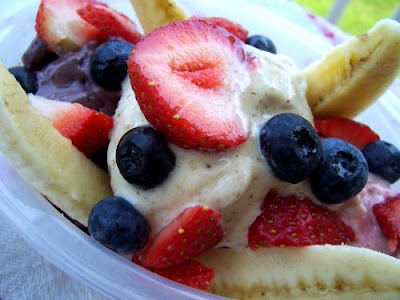 Posted by shannonmarie at 9:00 AM I just love when you can combine two meanings into one. It's like that game show, where the contestants have to link two words through a list of various other linking words. I can't think of what that's called or even the name of the game show, but you know what I mean.

Obviously, I've got another case of pregnancy brain again. I just can't come up with the words sometimes and occasionally find myself saying the craziest combinations. I think Heidi Klum (it's amazing that I was able to remember her name), who is also pregnant at this time, fondly refers to this as "pregnancy brain freeze."

But back to the point of this post. I just lost my train of thought after typing the title (see, I linked "strawberry fields" with "fields of greens"), which actually describes my purchases from the farmers market tonight.

If you read my blog last summer, you may recall my Friday night trips to the local farmers market. I am happy to report that it is back again for another year, and I've already tasted some of what it has to offer.

Of course, it is still early in the season, so the selection was limited. There were mostly plants. Fresh produce included asparagus (I've eaten more than my share lately), sugar snap peas (I already had some at home), herbs, strawberries and a variety of garden greens.

I just had to have strawberries, being that I've craved them my entire pregnancy. I was allergic to them as a child, but lucky for me, I outgrew it. I just hope Hayden isn't allergic to these sweet gems, which are so much better when they are locally grown.

I also picked out a few bunches of mixed greens. I'm so proud of myself for keeping these in my diet. They are so good for you and mighty tasty, too.

Don't forget to be on the lookout for local produce in your area. It is definitely worth it :-)
Posted by shannonmarie at 8:12 PM 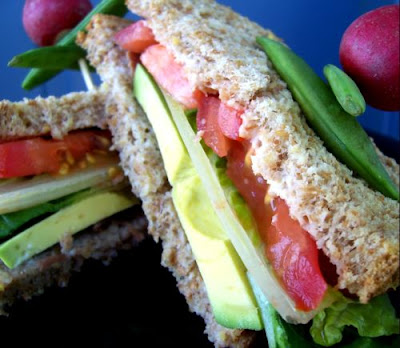 I have to confess that I haven't stayed raw this pregnancy, as I once thought I would. I had always hoped to attempt a raw pregnancy for baby No. 2, but unfortunately, my body has had ideas of its own.

Following my usual advice to eat according to what my body tells me, I strayed away from raw for the beginning of this journey. Lucky for me, I'm happy to report that I'm gradually finding my way back again. It seems that as my pregnancy progresses and the weather gets warmer, my cravings are returning for fresh raw fruits, veggies, nuts, seeds, etc.

What has changed is that I no longer desire to use these ingredients to create decadent raw desserts (okay, so maybe I have indulged once or twice). Instead, I prefer to eat them simply in their natural state (for example, I've been snacking on handfuls of raw nuts, rather than using them in my usual cupcake and other sweet recipes), tossed in a salad, blended into a smoothie or layered on a sandwich.

I guess this is a transitional period, giving me hope that I'll go back to my raw ways after Hayden is born.

Speaking of sandwiches and transition, I found Ezekiel bread to be a great transitional food the first time I went raw, so of course, I opted to add it to my diet now. I've been making raw almond butter/strawberry/banana sandwiches out of it, as well as some other varieties.

For instance, the warmer months always make me think of the tomato sandwiches and BLTs (bacon, lettuce and tomato, for those of you who don't know) my family used to make while I was growing up. Being that today is so nice outside, I opted to recreate a memory with this ALT (avocado, lettuce and tomato) on none other than Ezekiel bread.

You can make one, too, with lettuce wraps, portabello mushroom caps (been there, done that) or the raw bread of your choice. Just don't forget the cashew-based mayo; you can make it taste more authentic with the addition of some liquid smoke (although I didn't, since I wasn't sure if it was safe to use while pregnant). Enjoy :-)
Posted by shannonmarie at 12:43 PM 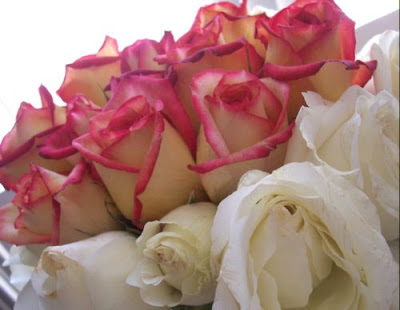 Playing the name game is part of being a mother. You and the father are responsible for coming up with the perfect name for your child to bare for the rest of his or her life. Talk about pressure. 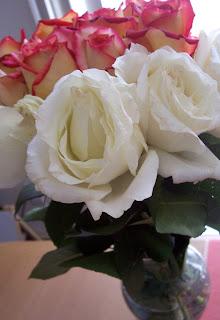 When I was a little girl, I had fun coming up with names for my dolls. There was Mary (my mom's name), Friend (she was her friend, of course), Whoopsie (inspired by the sound she made when you squeezed her belly, causing her pigtails to go up and down), Ugly Baby (actually my mom came up with that one due to her appearance after being toted around everywhere by her hair) and a long line of others that would take forever to mention.

Now, I didn't rename my Cabbage Patch Kids, as I felt it was important to keep their birth names (remember how they all came with birth certificates). One of them was Jay Cameron, a name I had hoped to one day pass on to a real child of my own.

As you all know, I do have a son (he picked out these flowers for me), but his name is not Jay Cameron. By the time I got pregnant with him, the name was already partially taken by my sister's son, Cameron (it suits him), so I opted for Jacob instead (well, I still ended up with a "J" name). 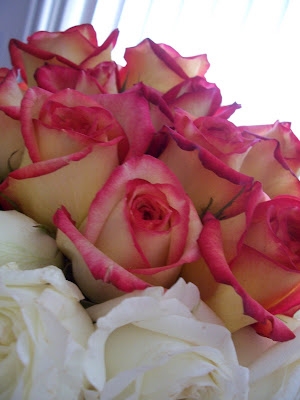 My hubby and I selected Jacob's name before he was conceived, and in the meantime, his name became No. 1 on the list of boy's names. It has managed to stay there ever since.

As for baby No. 2, we had decided to go for something less popular like Riley for a boy or Chloe for a girl. We are having a girl this time, so Riley was out of the running (although it is more commonly a girl's name). We also had to rethink Chloe, since a childhood friend of mine had already given that name to her little girl.

I announced in a prior post that the baby's name will be Hayden, which is seldom associated with a girl. In fact, I was under the impression that she would be the first female Hayden to be seen at the pediatrician's office where I work. To my surprise, this probably won't be the case. So much for being different.

A lot of thought goes into a name, and I'm sure my parents took the decision very seriously when naming me. From what I understand, my dad picked Shannon after hearing a song by the same name. The funny thing is that we later discovered it was about a dog. At least there's an entertaining story behind it.

That's what I love so much about my family; I've enjoyed making memories with them and laughing as we retell the tales. Thanks mom, for bringing me into this world and surrounding me with such a wonderful group of people. Happy Mother's Day :-)
Posted by shannonmarie at 6:48 AM