More gifts from the heart 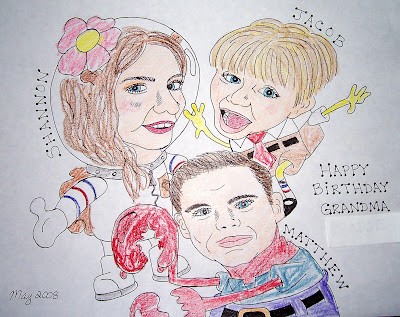 As I said in my last post, sometimes the best gifts are those handmade with love. Today, we are celebrating Matthew's grandmother's birthday, so we decided to show our love for her with yet another gift from the heart.

At first, we thought about giving her the typical family photo, since she likes them so much (Matthew's uncle suggested we give her Jacob's baby album, but she'd have to fight him for that). Instead, we opted to give her something with a bit more personality.

It started as a collage idea, using our headshots and some of Jacob's artwork. But then, we discovered we were out of ink in our photo printer.

No worries; I just sketched out the photos, adding Spongebob character bodies, which Jacob colored in with his crayons. He picked out the characters. He, of course, got to be Spongebob, while Matthew flexed his claws as Mr. Krabs and I tried a spacesuit on for size as Sandy Cheeks. 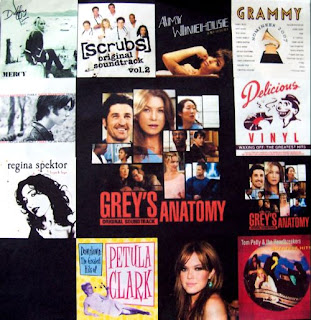 I hope she gets a kick out of the final results, which we had framed. If not, we also picked up some cookies, candies and fresh flowers for her.

Speaking of flowers, they seem to be a theme lately. My son got me the one I showed you in my Mother's Day post, and I gave some to my mom and grandmother, too. You also probably remember the fruit bouquet my sister made me for my birthday (I sure do).

Her birthday is coming up next month, so I need to get my thinking cap on for her. Any ideas? She also made me this great mix CD I'm listening to right now. Here's the playlist:

1. Ruby Blue/Roisin Murphy (my other sister choreographed a dance to this song; I didn't have a clip of that one, but here is a clip I found of her dancing.)
2. Mercy/Duffy
3. Rehab/Amy Winehouse
4. Fidelity/Regina Spektor
5. American Girl/Tom Petty & The Heartbreakers
6. Bust a Move/Young MC
7. Downtown/Petula Clark
8. Catch My Disease (Live)/Ben Lee
9. Hide and Seek/Imogen Heap
10. Across the Universe (Bonus)/Rufus Wainwright
11. Extraordinary Machine/Fiona Apple
12. Umbrella/Mandy Moore
13. In the Sun/Joseph Arthur

I hope you enjoyed listening to these tunes as much as I have.

Later today we'll be heading to a local Chinese food restaurant for the birthday gathering. Now, you would think I'd be at a loss for raw food there, but Rawbin assured me I wouldn't starve (or have to give up my rawness) at this place. She gave me a tip about their Mongolian grill; the last time she was there, she selected the raw ingredients she wanted and skipped the cooking part. What a "cool" (literally) idea :-)

I've been making out very well at these events lately. For instance, I went to a mother-daughter banquet at my grandmother's church last weekend, where they traditionally have a salad buffet.

Now, one would suspect this to be a raw no-brainer, since salads are like a raw foodie staple. However, the rest of the cooked world defines "salad" a tad differently. Last year, I filled up on fresh strawberries and corn chips (I know; not raw) just to remain vegan in a sea of mayo-based pastas, tuna/chicken salads and cheesy (and I'm not being funny) dishes.

This year, I came prepared with a huge chopped salad marinated in an Italian vinaigrette. I made sure to have enough for everyone, while still leaving a hefty helping for myself.

But, when I arrived at the function, I was surprised to find that this was not the only raw vegan option. My Aunt Judy brought a southwestern-style salad accented with corn and lime, while my Aunt Susan made sure there was a basic salad with lettuce, tomato and dressing on the side. There were also a couple veggie salads and a ton of fruit. I was so full, but I wasn't about to complain :-)

Wish me the same luck tonight. I'll be sending well-wishes back to you, too. Enjoy the rest of your weekend.

By the way, happy birthday grandma!
Posted by shannonmarie at 11:30 AM

Loved your drawings. Were they free hand? You got Jacob right on! You're much prettier in real life, though.

I'm glad you enjoyed the restaurant tip. I just spent a weekend in Florida where I expected lots of fresh produce at all the restaurants we sampled. But was disappointed that most only had iceburg lettuce and tomatoes. I found a broccoli salad at one, and brought my own avocado in for another!

Oh my goodness! You are amazing...that picture is so fun...you're are superb artist.

Have a beautiful day! XOXOX

I came across your raw girl scout cookies via google and linked your post about them on my blog-I thought you may want to check it out. Your cookies look sooo good!http://www.rawfoodporn.com/?p=201i

Thanks Rawbin. I sketched the drawing in pencil first and then added the ink.

I didn't know you went to Florida. Terry just came back from there, too. Why didn't either of you take me with you? :-)

Thank you Charissa. Enjoy your day, too.

Lesley Anne, I checked out your blog again. I've actually read it before and will be stopping by in the future, as well. Hope you like the cookies :-)