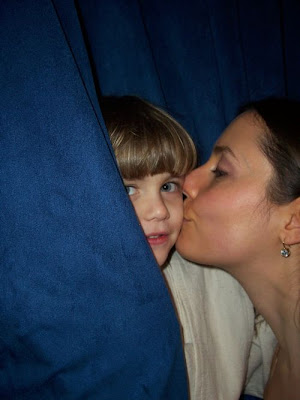 That's part of the reason you haven't heard from me in a while. I just couldn't imagine posting without a photo, but alas, I've found myself digging through my old image vault just to give this entry some visual interest.

You see, my son has taken over the digital camera these days, filling up its memory with not just photos, but videos, as well. I guess you could say it's his new trick, and although it has discouraged me from taking any new pics of my own, I have to admit that I'm proud of his accomplishments.

Not only did he figure out how to make movies; he also found a way to set up the camera to document himself learning to ride his new scooter. He creatively titled his clips, "Extreme Scooters." Thank goodness, it's much more tamer than it sounds.

He likes to set the camera up at one end of the hallway, where he announces the title of his show and what he is about to do. Then, he scoots to the other end of the hallway and back, so he can provide the play-by-play. He even acts out commercial breaks with his action figures. It's such a trip.

Kids are so very entertaining. I can't wait to see what it is like to have more than one. I'm hoping for twice the fun :-)
Posted by shannonmarie at 7:07 AM