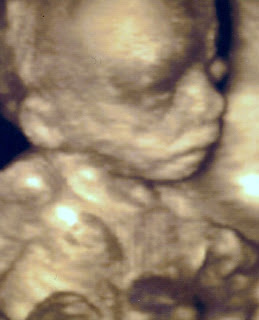 He is risen, and she is kicking.

That pretty much sums up the church service on Easter Sunday. Now, you probably assumed the first part of that statement, while the latter has taken some by surprise.

"He," of course, refers to Jesus, who rose from the dead in the sermon, while "she" is the tiny girl dancing around inside me. She was especially active when the choir and congregation were singing (no wonder I assumed she was dancing in there).

Yes, that's right; the little baby I'm carrying is a girl, as long as we really saw what we thought we saw (or didn't see) in the latest sonogram. It's like another Easter miracle.

You see, many of my family members thought it impossible for me to conceive a girl, mainly since my husband comes from a long line of all males (even though I told them there would still be a 50/50 chance). I guess it was time for a change.

I was so excited to share the news last weekend, as we attended holiday gatherings with both sides of the family. Reactions were of shock and amazement. Something tells me this tiny dancer is going to be spoiled.

I'm also proud to report that the dish I brought along was actually raw, although I can't take the credit for this recipe. I made a citrus and fennel salad (which I served over a bed of mixed greens) that Giada De Laurentiis made on her show, "Giada at Home" (She has a little girl, too; I hope I look that good after giving birth to mine).

The dish was a hit. Even my cousin's wife, who isn't a fennel fan, enjoyed this recipe. If I knew it was going to go over so well, I'd taken the time to snap a photo before it was all gone. Instead, you'll just have to view another sonogram pic of our little lady. Her name is Hayden :-)
Posted by shannonmarie at 12:59 PM