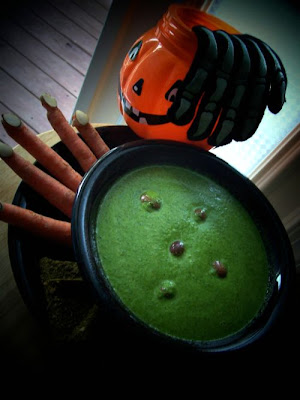 That's the opening line from "Goosebumps," a series of books brought to life to scare little kids and grown-ups alike (can you believe I had a dream about the talking baby from one of the episodes?), but in a much tamer fashion than the standard horror flick. These tales are reminiscent of the ghost stories told around the campfire.

The 90s TV series (my youngest sister grew up on these and still DVRs them to watch after her college classes) has been resurrected by Cartoon Network, now airing them nearly every evening for the past two Halloween seasons. Now, my son is hooked, although he makes sure to watch it with mommy and daddy. We're like his security blankets.

I've noticed that I've had goosebumps, too, but not due to the creepy entertainment. It's just really cold around here. The chilly temps make me want to cuddle up with a good bowl of soup.

And to add to the spookiness, it just had to be some form of green ghoulish goodness. I opted to blend up some of Kristen's winning Sumptuous Spinach-Thyme Soup (she took home the title of First-Course Phenom in VegNews Reader Recipe Showdown in the Sept.-Oct. 2008 issue) with a handful of olive eyeballs.

Speaking of hands, check out the carrot fingers, complete with almond sliced nails. They are great for dipping or just decoration (of course, I ate mine).

For a sweeter treat, try making a fruity soup similar to a green smoothie with peeled grapes for floating eyes (I remember passing these around blindfolded, while someone shared a spooktacular story at a childhood Halloween party). You could also serve it out of a cauldron and call it witch's brew. Who knew it could taste so good :-)
Posted by shannonmarie at 9:16 AM