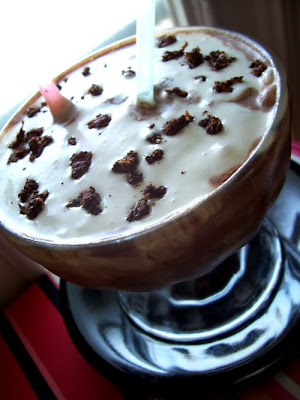 I meant to type this yesterday, but I was too wired to sit still and concentrate on a post. Instead, I spent my afternoon bopping around the room, getting in trouble with my son while playing school (obviously, he was the frustrated teacher, instructing me with the phrase, "sit down, legs crossed, applesauce ... yummy, I've got more to say about that later).

Ever since breaking my foot, I've really missed being able to dance around my house. You know; everyone does it when they think no one is looking. It's my favorite form of exercise.

Okay, so maybe I shouldn't be shaking it too much this soon in the recovery process (my doctor still estimates another 4-6 weeks left of healing time), but I just couldn't help myself. I had so much energy built up that I forgot all about my foot (that reminds me of the line from "Can't Hardly Wait," when one of the characters says he can't feel his legs and the whole house of drunk partiers cheer).

Now where did all this energy come from? It was the result of another rawified chocolate recipe, of course (no, I was not drinking ... or at least not alcohol; I don't touch the stuff). 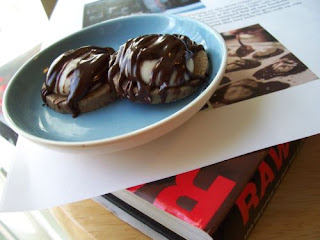 In my last post, I mentioned how much I enjoy making raw versions of popular restaurant dishes, especially if I've never sampled them myself (like the raw mallomars I attempted to create from Pure Food & Wine's takeaway menu, although I've never actually been there). It's like my form of travel, since I don't have many opportunities to get out and explore other destinations.

So, yesterday I decided to make a raw version of the frozen hot chocolate made famous by Serendity III, another N.Y. establishment I have yet to visit. Hopefully, I'll make it up that way in the near future. In the meantime, I'll just have to satisfy my taste buds in the comforts of my own home.

From what I understand, Serendipity (love that movie, by the way) uses a top secret recipe, containing as many as 14 different types of chocolate. To recreate this decadently rich and complex beverage at home, you can either purchase this combination in premixed packages or do what I did. 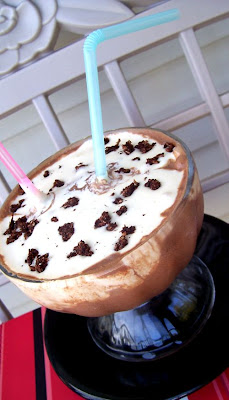 Since I've never tasted it myself, I don't know if mine was anything like the original, but it sure was good. I just rummaged through the house in search of any form of raw chocolate I could find to really make the flavor special.

I found chocolate rocks (check out NaturalZing, and while you're there, congratulate Jeff and Helen on the birth of their new baby), raw cocoa butter, two types of raw cocoa powder, organic nonraw cocoa powder (I only used a little for variation), cacao nibs, raw carob powder (I know; not chocolate, but similar) and some premade raw chocolates. I blended all of these with some hazelnut/Brazil nut milk, which I sweetened with agave and heightened the flavor with some vanilla (always goes well with chocolate), cinnamon (another cocoa companion) and a dash of cayenne pepper (this is "hot" chocolate, even if it's served cold).

Using about a cup of this chilled, thick, rich mixture (it might as well have been a pudding at this point), I blended in a whole tray of ice cubes, which resulted in a slushy texture. I poured my now frozen "hot" chocolate into an ice cream goblet, similar to the one used at Serendipity, and topped it off with some raw whipped cream (a cashew and coconut mixture, which I was too anxious to let firm up in advance; at least it still tasted divine) and shredded raw chocolate macaroon pieces.

Somehow I managed to refrain myself long enough to get a few photos, both indoors and outdoors. The now chilly air helped keep my frozen drink intact, while I snapped these pics. 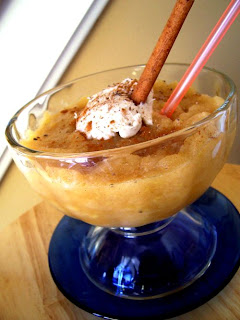 Can you believe that the temperature has dropped into the 60s in just the past few days? Just last week, my son and I were enjoying 80 degree temps on the beach. That's just crazy.

So, you might think I'm crazy for craving frozen drinks in chilly temps. It kind of reminds me of how my sister and I would go swimming at any hotel that had a pool, regardless of the time of year or weather. I think we even turned purple after taking a dip in Ohio. Brrrr ... that was cold!

I had another slushy beverage this morning, but this time, I cooled down the usually hot apple cider. I just blended together some apple chunks with a touch of apple cider vinegar (just a little to intensify the flavor), mesquite powder, vanilla, sea salt, cinnamon, ginger, nutmeg and ice cubes, poured it into a glass and topped it all off with some raw whipped cream (this time I allowed it to thicken in the fridge), a cinnamon stick and a sprinkling of more spices. Yum!

Although delicious, this chilly drink unfortunately didn't provide the kick I needed to rewarm my insides. Now, where's that chocolate?
Posted by shannonmarie at 12:48 PM