Watermelon for a penny per slice 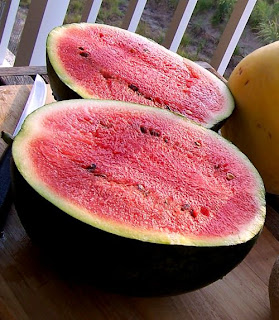 Did that get your attention? It certainly got mine. But, unfortunately with the economy the way it is, we'll never see that price again. This deal is a just a memory preserved in a movie I watched last night.

I've always loved "Pollyanna," the childhood Disney flick containing this steal on watermelon. At the bazaar near the end of the film, a vendor is serving up huge quartered melon slices to the town residents at just a penny a piece. For that price, you could get a whole one for only 4 cents. Amazing!

Now, I could be bummed about the fact that one can no longer find such a bargain, but my optimistic side says, "hey, at least I can still eat it" (my youngest sister is severely allergic. Watermelon, along with various other raw fruits and veggies, makes her mouth itch and sometimes causes her throat to swell shut).

Looking on the bright side can be contagious as Pollyanna proves to the entire town. She gets everyone involved in her glad game, where instead of being so focused on the negative, she celebrates the positives. 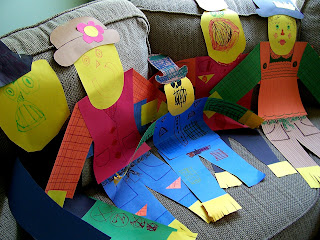 For example, she talked about how she had wanted a doll, but was accidentally sent a pair of crutches. At first she was disappointed, until her father invented the glad game. Although she did not receive a doll, at least she didn't need to use the crutches.

I, on the other hand, did have a use for the crutches, but thank goodness I'm starting to get around better without them. I even made it down to the beach again yesterday to catch some rays, sit on the sand and enjoy the view of the water. Although we only had 45 minutes to take in what could be the last warm beach day of the year, I was still grateful to have that time at all, especially now that it's fall.

Speaking of fall, Jacob and I spent the rest of our day making scarecrows out of construction paper, an art project he did in school. He loves to come home, pretend he is the teacher and show us (Matthew and me) what he has learned. Check out our finished scarecrows seated on the couch. Jacob thought we should take this pic before hanging them up in the windows for all to see. 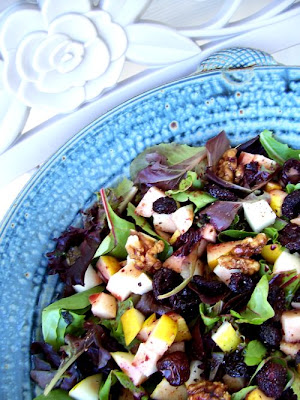 I got to take in some more sights this weekend, as Matthew and I went out Saturday night for some window shopping (okay, so maybe I bought a few things) and a bite to eat. I noticed that Panera had its Orchard Harvest Salad on its menu again, but we ended up dining somewhere else.

So, with a craving for this seasonal salad (minus the cheese), I made my own yesterday, but better. I stuck with the mixed greens, pears and dried cherries. I also would have added the pecans (raw, of course), however, I was surprised to find I was out. No worries; I just substituted Gone Nuts! Maple Mesquite Flour Candied Walnuts, which were much yummier.

As for the dressing, making it at home is definitely the better way to go. The ingredient list on the website has a lot of additives, which were easily eliminated in my own kitchen.

So, I made mine out of some cherries, balsamic and red wine vinegars, lemon juice, olive oil, sesame oil, garlic, sea salt and pepper. I also added a splash of grade B Maple syrup to compliment the candied walnuts. Scrumdiddliumptious, if I do say so myself (I snagged that word right out of a Willy Wonka script).

I'm feeling very glad right about now, and you can see it on our faces in this winning pic (okay, maybe we have more smiles in the first one, but it was a close race; I think they were only separated by one vote). Thanks for voting :-) 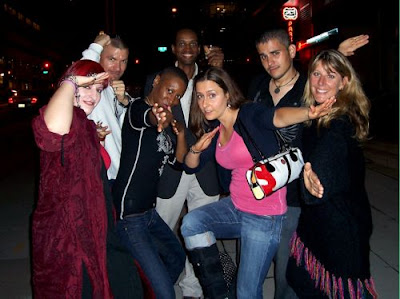 Posted by shannonmarie at 8:33 PM