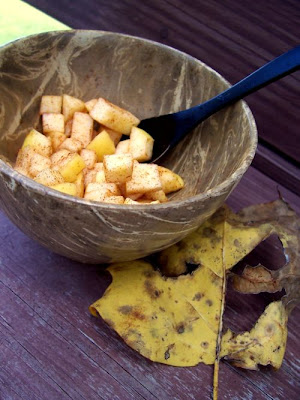 It's October, the first full month of fall. The leaves are changing colors and drifting to the ground. The air is now cool and crisp, like the apples I look forward to each and every year.

These once forbidden fruits (the Eve in me keeps me coming back for more) pack a nutritious punch ("an apple a day keeps the doctor away," so they say ... hey, who's "they?"). And, although sometimes taken for granted as a year-round grocery store staple, they can now be found locally and in season at roadside stands and farmers markets (the one by my house is still going strong until the end of the month; maybe I can get down there tomorrow night).

My favorite and simplest way to enjoy an apple, outside of just picking one and taking a bite, is to cut it up into a tiny, less than perfect dice and sprinkle it with cinnamon, sea salt and a slight drizzle of agave (which is not necessary when the fruit is just right). Can you believe I used to eat this all the time before going raw, except I'd nuke it the microwave as a quick and easy snack? What was I thinking? This way is so much better.

I nibbled on my bowl of spiced apples as I checked my e-mail this week. Guess what I found in my Everyday with Rachael Ray e-newsletter? She was on an apple kick, too. Go figure; we must be as original as everyone else with a fondness for seasonal foods. 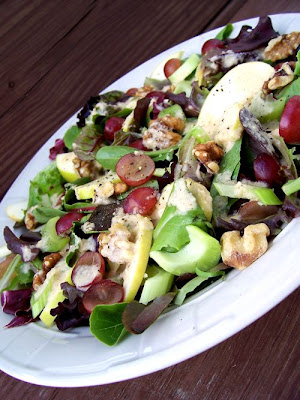 Anyway, no big surprise. She had links to some other hand-picked, "Top of the Crops" apple recipes, including the salad I had for lunch today. It was an Autumn Double-Apple Salad, named for the fresh apple and ACV (apple cider vinegar; makes me want to make some rawified apple cider donuts, like the baked ones featured on $40 A Day) combination. Delish, if I say so myself. I've been making this same dish for years. Again, great minds think alike. Ha ha.

Maybe that's why I've never followed through on the uncookbook idea. It just seems like these ideas come to me in the same way they pop up in the heads of everyone else. You know what I mean; you toss something together, only to find that another uncook has the same idea.

It's like what my hubby once told me. He said recipes are like songs. The more that are written, the more they begin to sound the same. How else can you explain why there are a zillion recipes for fried chicken out there (obviously, I wasn't planning on publishing one of those) and probably as many tunes that can easily be morphed together seamlessly?

Oh well, one day I'll find my niche, something that sets me apart. Maybe then, I'll put that book together with my own personal spin on it.

In the meantime, I haven't heard much from all of you about the Raw Fu pics. Have you picked your favorite pic (kudos to those who did)? I know it's not a big deal, but I thought it would be a fun way for Disqus newbies to test it out. You don't need a blog to sign up and comment. Don't be shy; give it a try :-)
Posted by shannonmarie at 4:42 PM