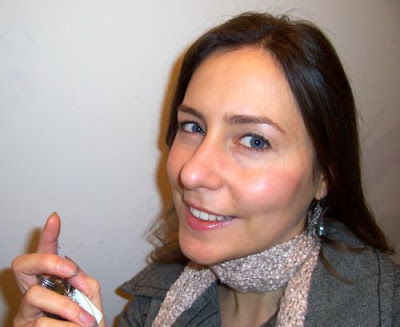 Or something like that. I'm off to go shopping with my mom and sister. Wish me luck finding some raw eats out there. Lunch is also part of our tradition. I think we might go to Chevy's. Yum, guacamole!

P.S. My mom made me this great scarf out of bamboo. Thanks mom :-)

When I arrived, my sister was feeling a tad bit under the weather, but since it was her idea to leave that early, she still wanted to go. She is always the most enthusiastic about this trip. In the past, she's been so cute, with all her ads lined up and plan in hand, but this morning was another story.

We went to Michael's first for all the crafty stuff (remember, my mom is a knitter, and there was 25% off throughout the whole store until 9 a.m.), and then across the street to Target for more gifts. I ended up standing in line at the electronics counter for more than an hour, waiting for a game one of the sales people said he put up there for me (they wouldn't let anyone walk through the store with them).

When I got to the front of the line, I purchased what I thought was the correct game, only to find out when I got home that is was for the original XBox and not the 360. My husband informed me of the mix up when I got home early (my sister couldn't "grin and bare it" anymore; she is such a trooper. I hope she feels better now). So, I hiked (not literally) a half an hour each way back to the Target to exchange it. Of course, there weren't anymore left.

At first I was disappointed at how my day was going. I never even made it to Chevy's for our annual girls' lunch, or any other stores. But, that's okay. I now get to spend the day with my boys, and I get to eat leftovers from my raw Thanksgiving for lunch. Actually, I am gobbling (ha ha) them up as I type this.

And, I now have the opportunity to tell you the details as to what is on my plate (pictured on yesterday's post):

Let's start with the stuffing, which I started the night before Thanksgiving. I went with the Southern Corn Nut Stuffing I mentioned in a previous post. It reminded me of the Stove Top I loved as a child. It even smelled like it, especially when it was in the dehydrator. The breading was made in the dehydrator overnight and then reconstituted in the food processor the next day. I will definitely make this again.

I also used the dehydrator for the carrots and the green beans. I marinated the green beans in lemon juice, olive oil, pepper and sea salt; and the carrots in lemon juice, grade B maple syrup, pumpkin pie spice, cayenne pepper and sea salt. Then, I "cooked" them for a few hours in the dehydrator. They tasted much fresher than their stove top counterparts.

The mashed potatoes are really pureed cauliflower with raw macadamia nuts, olive oil, pepper and sea salt. They don't quite taste the same, but the texture is nice. They are better the next day, and really combine well with the gravy and stuffing in one bite.

The gravy was the mushroom gravy from the Rawvolution book. The list of ingredients were rather extensive, including mushrooms, carrot, celery, onion, tahini, garlic, lemon juice, Nama Shoyu (I used Bragg's), water and sea salt (I eliminated the red pepper and coconut water, and added a little bit of miso and poultry seasoning for more flavor).

The lengthy ingredient list yielded a large amount of gravy. I'll probably be eating it on everything for the next few days. What do you think it would taste good on?

My favorite, and most colorful item, on my dinner plate was the cranberries. I made it last year for a family gathering; my grandmother loved it. I just puree cranberries, apple, orange, dates, vanilla, pumpkin pie spice, orange zest and sea salt in the food processor, and stir in some raw walnut pieces at the end. You've gotta try this one. Stock up on cranberries while you still can.

What's a holiday meal without dessert? I ended my evening with a generous serving of raw apple cobbler. The recipe is on the Gone Raw site. I ended up using only about 3/4 of the topping the recipe made, and saved the rest to either make cookies or eat like a cereal with fresh fruit and nut milk.

I had hoped to make raw banana spiced ice cream to put on top, but I ran out of time. That is the beauty of leftovers. I can have it again tonight, and top it off right. Things are definitely looking up :-)
Posted by shannonmarie at 2:18 AM

I LOVE how Chevy's will make your guacamole right at the table so you know exactly what's in it! Good luck at the mall. You must be crazy!!!
BTW, just ordered again from Naturalzing... got me a spiral slicer (Saladacco Spiralizer) some raw macadamia nuts, some cocoa butter, and oh yeah a new hemp shirt in "moss". I've done my Black Friday shopping without leaving the yard.

I've never had them make my guacamole table-side. I'll have to ask about that.

Never made it to the mall. I guess I was able to keep my sanity.

I thought you already got a spiralizer from NaturalZing? I've thought about getting one in the past, but for now, I am content cutting my veggies into pasta strands myself ... until I actually decide to purchase one.