What's hot and what's not 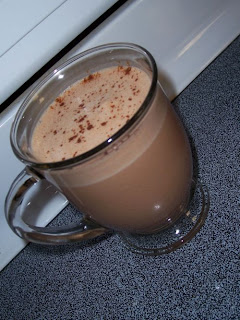 I thought I'd post a little something about the warm and cool foods/beverages I made in the past few days using leftover ingredients from my holiday meal.

I make it a rule to never let food go to waste in my household. My menu for the week is usually comprised based on what I already have on-hand and the shelf-life of each item; special occasions are no exception.

For instance, the first step in making the stuffing involved making a nutmilk and straining out the pulp for use in the recipe, along with only 1/4 cup of reserved milk to add moisture to the stuffing. What would would I do with all the leftover milk?

Certainly, I wasn't going to just dump it down the drain. So, I used it to experiment with the little booger-like leftovers of my failed marshmallow attempt (no, I didn't throw those out either) in a hot (more like lukewarm) cocoa recipe.

I used the room temperature walnut/pecan nutmilk leftover from the stuffing recipe, combined with cocoa powder, lecithin (as a thickener), cinnamon (enhances the chocolate flavor), vanilla (my mom always put it in her homemade hot cocoa), cayenne pepper (to create a feeling of warmth), sea salt and agave nectar; and blended it with hot (but not too hot) water in a blender until frothy. Then, I added the mock marshmallows, which unfortunately, sank to the bottom of my mug, and topped it off with a sprinkling of cinnamon. 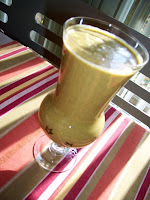 To my surprise, by the time I drank down to the bottom of the glass, the faux marshmallows actually tasted a little like the sweet treat I remembered floating at the top of the traditional hot beverage.

This recipe can also be served chilled or over ice.

Even after making this warm concoction, there was still an ample amount of nutmilk left, so I decided to fulfill my pumpkin craving on Thanksgiving (since I had opted to make an apple-based dessert instead) with Penni's Pumpkin Creme Power Shake. It really does "smell like pumpkin spirit" (I love that title). It was like a chilled liquid pumpkin pie filling. I plan on drinking it again soon. Thanks Penni - love your blog :-) 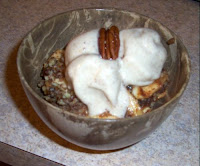 Speaking of chilled, I finally got around to making some banana-based spiced n'ice cream (that's how I refer to my raw "ice creams") to top my leftover serving of raw apple cobbler. It was really good, but I actually preferred my other leftover use-up idea.

I still had some ice cream scoopfuls of raw whipped cream icing (from my marshmallow experiment and cinnobun topping), which I chilled in the freezer. I topped off my last serving of cobbler with them, and decided to snap this pic right before I finished polishing it off. Now, I really want to whip up another batch soon. 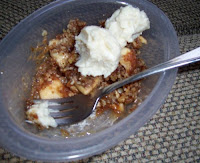 To switch from sweet to savory, I definitely had a lot of leftover gravy, so I (not-as-creatively) have been dipping raw veggies in it as a snack. It really does add some flavor to the ordinary raw crudites.

So, what creative ideas have you done with your leftovers?
Posted by shannonmarie at 7:15 AM

way to be resourceful! i wish i had some inspiring leftover stories, but we didn't have any leftovers.

I only had leftovers because I am the only one in my family who eats this way. Sometimes I wish they would at least be a little more experimental.

You're very lucky to have someone in your life to share in this lifestyle.

it's a really new development. we'll see how long it lasts...

My fingers are crossed for you, too :-)