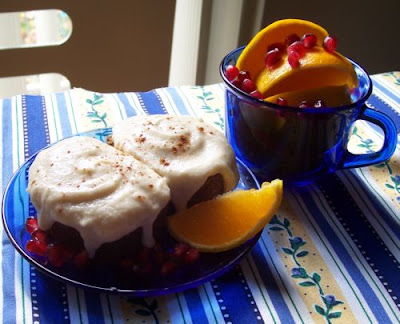 I've been thinking about the questionnaire I posted a couple days ago and trying to stay true to my answers. For instance, I said I was going to make Pasta Primavera this week, which I did successfully (see my Nov. 19th post) , and I am already in the process of starting my Thanksgiving feast. As for the cinnamon rolls, I kinda cheated a bit.

I had hoped to put a new spin on my original recipe, but I am not sure I will have an opportunity to get around to it before the end of the week. Instead, I turned a "mess into a success," as Rachael Ray would say, to change up the usual outcome only slightly.

Actually, the roll itself remained the same; the icing is what was different. I hadn't planned on giving the already prepared buns this particular topping, but fate has a funny way of intervening.

Another answer I gave on the questionnaire was about wanting to find a way to make raw marshmallows. I had succeeded in the past with a cooked vegan version, yet I was clueless as to where to start with a raw one.

However, I was anxious to make my first attempt, which failed miserably. For some reason, I thought I could take the recipe for my favorite fluffy icing (the whipped cream icing Carmella puts on this wonderfully tasty Banana Chocolate Creme Cake), and dehydrate little mounds of it to put in my nearly raw hot chocolate (yes, it can be done; check out Dhrumil's Yerba Mate Latte, another warm raw beverage).

Unfortunately, after many hours in the dehydrator, they resulted in just little gobs of goo, almost like boogers. Yuck! At least they didn't taste like them (as if I would know; I think not). They probably would work in my hot chocolate, but they certainly are not pretty enough to post.

Of course, I was smart enough not to put the whole icing recipe in the dehydrator, so I put some on my cinnamon rolls. They look even more like the real Cinnabons I used to adore, but in my opinion, taste even better (and definitely better for you). Fate definitely works in strange ways.

In conclusion, I am not going to let my first attempt at making raw marshmallows discourage me from trying again. If it had not resulted in error, I wouldn't have had such a lovely topping for my ordinary cinnamon rolls.

Besides, I think I already have another plan in the works. But, if it fails, Sarma, you have to tell me how to make your raw mallomars. Please, just one little hint :-)

Wow, it is beginning to smell like Thanksgiving in here. I've got the Southern Corn Nut Stuffing (from this discussion. Thanks, Maraw.) in the dehydrator as I type this. I can't wait to start the rest of the menu tomorrow. I'll let you know how it all turns out.

In the meantime, Rawbin, in response to your question about some tips to handle your Thanksgiving dilemma, check out Raw Food Right Now's recent post. I am also glad to hear that you won't have to spend your holiday at a restaurant now. But if you did, I'm sure they would make an exception to let you bring in your own food on this special occasion. They let people bring in their own birthday cakes, right?

P.S. Is it just me, but speaking of messes, don't the messiest foods seem to taste the best? These new and improved cinnamon rolls had me dripping icing all over my fingers, but it didn't stop me from savoring every last bite (and licking my fingers clean; I wasn't going to let it go to waste).
Posted by shannonmarie at 4:15 PM

Thanks for the link to the Raw Food Right Now recent post. I took advantage of their discounted Thanksgiving ebook including recipes and advice for eating raw with the family with out offending. (I'd put a link here, but I haven't got a clue how...)

I haven't figured out how to post a link here either. I think I might have an idea, but I need to try it first to see if it works.