Cashew Crepes for one 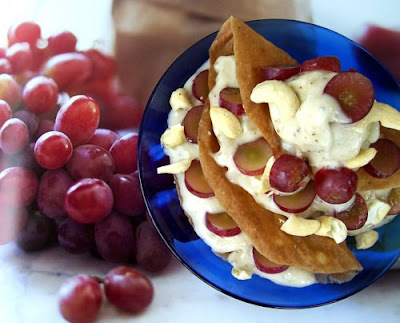 No, make that two, considering the fact that whatever I eat, baby Hayden eats, too.

I've been taking it easier since becoming a mommy again (I know; I never stopped being a mommy to the first one), and as a result, I've also watched more than my share of television (something needs to be done about that). In the process, I've found inspiration in some of the most unlikely of places. 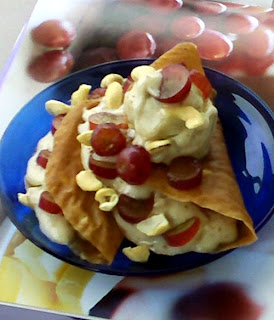 For instance, I ended up making a mock blueberry cheese to complete a salad I saw on Barefoot Contessa. And, to top it all off, I also rawified Tyler Florence's Cashew Crepe after watching him prepare it on an episode of Rachael Ray's talk show.

Okay, so maybe my true reason I perked up during his demonstration was because he made his own cashew spread to use in the crepe batter and as the filling in the finished crepes. Unfortunately, his recipe called for the Planter's salted variety, but that didn't mean I had to use them.

Anyway, back to my version. I kept it simple, as usual (it's got to be easy and economical with a new baby in the house), blending one banana with a Tbsp. of cashew butter, a squeeze of lemon, a touch of vanilla and a sprinkling of sea salt until smooth. Then, I poured the mixture out onto some parchment and spread it out to create two rounds. These were "cooked" in my old school dehydrator until dry yet still flexible (about 6 or so hours on one side, and another hour or 2 on the other).

When the crepes were ready, I jazzed them up a bit by filling/topping them with a cashew banilla (banana-based vanilla) n'ice cream (instead of just the cashew spread), sliced grapes and some cashews. It looked so much prettier than Tyler's, and it was probably tastier, too.

I quickly set up a shot and tried to take a pic with my uncooperative camera. It only took one photo as usual (the one at the top), so luckily, Jacob snapped another one with his. I cropped it down for another view (the second pic), but in the end, also opted to use the whole photo (seen below), which caught my hand and camera in the corner. Thank you Jacob :-) 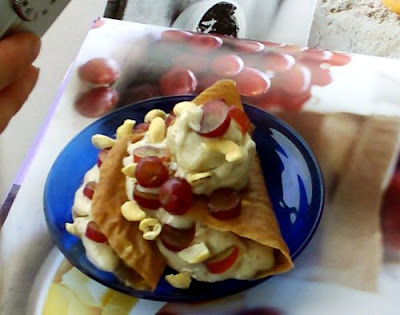 Posted by shannonmarie at 7:17 AM