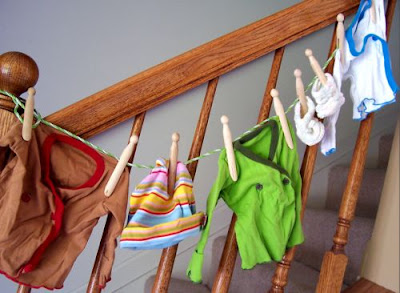 No, I'm not referring to the delivery of my baby girl again, although it is for her. This special delivery came all the way from Alaska. It was shipped from one of my readers to my good buddy Rawbin, who kept it safe until she could drop it off in person. 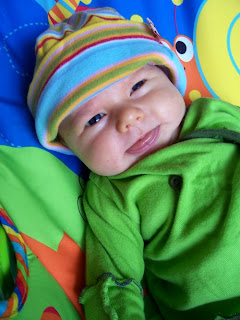 But, let's backtrack for a minute first, so I can fill you in on my week. It's been a bit more hectic than in the first couple weeks at home (then, it was just the craziness of trying to adjust to having a baby around the house again). Hayden is awake more (as you can see in the pic to the right), and I'm fulfilling more requests to see her open eyes.

Over the weekend, Hayden got to attend her first wedding. Proceeding the nuptials, I happened to catch "Father of the Bride" on cable, and snuggled on the couch with her to watch it (okay, so that was the relaxing part). Matthew, on the other hand, left the room, not wanting to think about walking his little girl down the aisle in the future.

I was excited to take our young lady to the event, as I sang "Going to the Chapel" to her while getting her ready. She ended up being the bell of the ball. The only person who received more attention was the bride, of course (I hope she didn't mind that Hayden ended up wearing white, too). 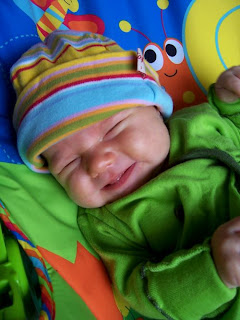 I even got some special attention, when I asked the wait staff whether or not the raw fruits and veggies from cocktail time would be left out for dinner. Thank goodness I inquired about this, because it was not in the original plan. When I told them I was a vegetarian, they nicely set aside a plate of large romaine leaves topped with a variety of raw veggies and another plate of fresh fruit. I couldn't thank them enough.

The next day, we went to Sunday dinner at my parent's house. It was Emmy night, which usually means getting dressed up in old prom, homecoming or bridesmaid dresses (except for the men, who tend to skip this part; the boys like to put on costumes from their favorite movies or T.V. shows), parading on the red carpet, eating h'orderves and casting our ballots with our award-winner predictions.

This year, we kept the h'orderves (my mom made sure to have plenty of raw fruits, veggies, guacamole and nuts for me), but most of the rest of it went out the window. The funny thing was, I didn't think much of it, because I was so involved with Hayden (she's had enough of the paparazzi, as you can see in the pic to the above left). I even went to bed without watching most of the broadcast. 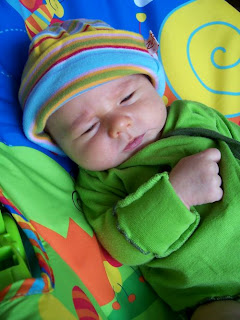 On Monday, my friend Becky came for a visit. She's expecting a bundle of joy in December (she has the same due date I had with Jacob), so she had to come by to see how we were doing. She even treated us to lunch, for which I was very grateful.

Still happy as can be from all of our visiting, Hayden and I were even more ecstatic when Rawbin called Tuesday morning (this is the first we've been in contact since the birth). She was in the area, so she decided to drop by on her way to work with "a package from a fan," she said.

I wondered who it could be (Hayden is thinking about it in this pic to the above right), but I couldn't ponder for long, as Rawbin arrived quickly on my doorstep with the package in hand. It was from Stephanie, one of my readers from Alaska, who wanted Rawbin to capture the moment I opened it in a photo. 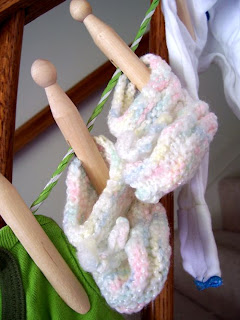 Unfortunately, Rawbin was short on time and I was still in my pajamas (this really was spur of the moment), so the real time photo didn't happen. I did, however, take these pics to thank her properly in this post (By the way Stephanie, you should also be getting a thank you card in the mail).

As you can see, the package contained the cutest little baby clothes, including three brightly-colored tops, a striped hat and some tiny booties (do you think she made them?). Inspired by the line of clothes my cousin's wife Lara gave to us as a shower gift, I used the same line and clothes pins to properly display these items for a pic. I also put Hayden in one of the tops and the hat for a fashion photo shoot (she's such a natural. She reminds me of my old Glow Worm doll).

Thanks again for the thoughtful gift, Stephanie. We really appreciate it :-)
Posted by shannonmarie at 12:12 PM