Be still, my "beet"ing heart 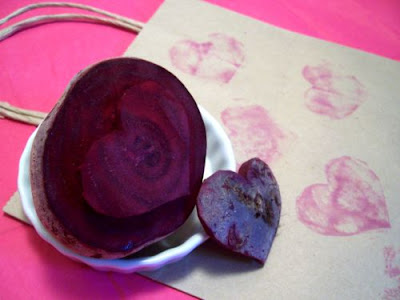 A love affair has begun with this brilliantly colored veggie and its many uses. I juice them, make crackers out of the pulp, add them to salads and more. 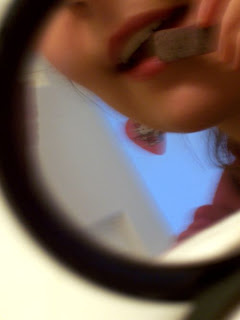 Beets also lend themselves to making a vivid dye. I add a touch of its juice to icings and other recipes, which are enhanced by its romantically magenta hue.

Today, I took advantage of their pigment, using it as a stamp on a plain brown gift bag. I cut a beet into a heart-shape stamp, and by pressing it firmly against the bag, made soft and natural pink-tinged prints, perfect for the upcoming Valentine's Day holiday.

I've also been known to add them to my beauty routine (along with a little dab of vanilla on my wrists and behind my ears while I'm whipping up something sweet in the kitchen). "You Can't Stop the 'Beet'," like that song in "Hairspray" (seriously, does that song ever stop). There's no end to this vegetable's possibilities.

It makes a complimentary shade for your pout and a blushing stain for your cheeks. The same can be accomplished with cherries, strawberries (which can also be used to whiten your teeth) and other brightly colored fruits and veggies. Talk about natural beauty. Tasty!

Next, I think I'll go make a smoothie version (I just skip the juicing part, blending all the ingredients in my Blendtec) of Sarma's hot pink juice from her "Raw Food, Real World" book (Give It To Me Raw members get 15% off their One Lucky Duck orders, so sign up today). It's a combo of beets, strawberries (do you think their whitening effect will negate the staining properties of the beets?), pineapple and ginger. Don't knock it until you try it.

Now my friend Raw B (hey, beets start with "B") probably has had this juice as part of her juice feast. She's lucky enough to live nearby its origins.

Yesterday, which also happens to have been my three month anniversary of this blog, B suggested starting a Rawdorable fan club, complete with t-shirts. She's so sweet (I'm definitely a Raw B fan). Anybody interested in joining her? Now, I'm blushing, and it's not just from the beets.

I understand if you think it is a little ridiculous. My hubby and I had a good chuckle about the idea. But, before I laugh it off entirely, I told B I'd ask what you, my loyal readers, think. So, what do you think? 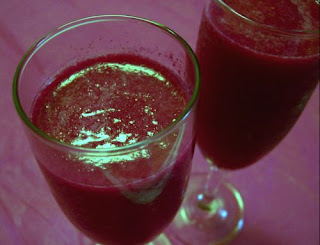 Posted by shannonmarie at 10:33 AM

Fun post! You can also do some interesting coloring and cosmetic work with the fruit of the prickly pear cactus.

nice post! beets are one of my faves...thanks for the insiration, i will look upon the humble beet in a whole new (rosy pink) light now xx

of course, you adorable girl, i'd join a fan club for this blog!! and also due to my recent fascination for whipping up stenciled and appliqued shirts, i'm completely behind a t-shirt idea!!
i would SO proudly wear my adoration for you across a shirt!
xx jenny
and the mesquite + lucuma finally came- hooray!

Beets have, for a long time, been one of my all time favorite favorite produce items. I'm so glad to see I'm not alone!

Your mint chocolate cookies were SO good, I made them today. I used our standard "raw chocolate" recipe and it was perfect to coat the cookies in. If you want, I am happy to send you the recipe.

Thank you again for being such a great inspiration.

You're such a trip, girl! I love your blog. I've missed it while away last week, just catching up now :)

I think you already have a fan club :o)

I would totally be part of any fan club that included you, darlin.
:o)

I picked up a bunch of beets at the store the other day, but I got scared and put them back. I can't seem to get the bitter taste of the borscht my dad gave me when I was a kid out of my sensory memory. So this post is a serendipitous nudge towards revisiting beets for me - thanks!

I would definitely wear a rawdorable t-shirt, and I am totally part of your unofficial fan club and would join anything you made official!

I've already commented that I love your creative shirts, etc. and I find myself checking your blog on a daily basis, so, I guess I'm in too. ;o)

Oh Oscar, I'm so glad you stopped by. I'll have to check out that prickly pear.

Shell, it's nice to know I'm in good company with this whole beet thing.

Jenny, thanks for the award. I love the shirts you're making. Anyone reading this check them out.

Dee, you're definitely not alone.

Caron, thanks for being a fan. Of course, I want the recipe.

Hey Kristen, missed you while you were gone. Your getaway looked so relaxing.

Kathy, you've got me blushing again.

spazgirl, I don't think my complexion can get any pinker. I hope you like the beets the next time you try them. Sometimes you just have to approach them differently. Who knew they mixed well with strawberries and pineapple?

Thanks, munchie. I guess I need to reconsider the shirts.