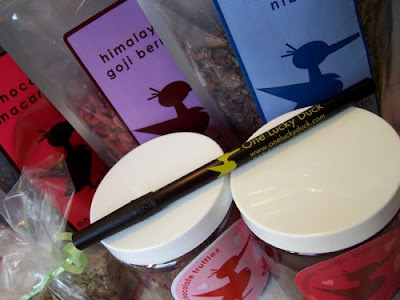 "Well, do ya punk?" Sorry, I didn't mean to direct that last statement at you. I just asked the first question, and then Clint Eastwood took over with one of his famous quotes.

I guess I do feel lucky, since my wonderful husband gave me the yummiest Valentine's gift. I know; Valentine's Day isn't until Thursday. But, once he got it in his hot little hands, he couldn't wait to give it to me.

It arrived the other day at his parent's house, which isn't out of the ordinary. He's always having packages sent to their address. But, this time, the way he handled his package (okay, that did not sound right) sort of tipped me off.

He kept holding it, so the top of the box was never facing me. And, as if that wasn't awkward enough, he put it in the trunk of the car, where I wouldn't be able to look at it.

Now, he couldn't pull a fast one on me. I know a duck when I see one. Based on the size and shape of the box (and his efforts to conceal what may have been a bright yellow sticker on top), I was fairly certain, not only was it for me, but it also was from One Lucky Duck.

So, I did what any girl would do; I asked him if the box was a gift for me, and if it was from "The Duck."

"You're just as bad as Jacob," was his response. My son is always asking if the mail is for him.

"No," I replied. "I just thought you were trying too hard to make sure I didn't see it."

Feeling a tad bit like he had just been caught with his hand in the cookie jar, he made a few excuses and then quickly changed the subject.

Now, you would think since I didn't revisit the topic, he would have held out until Valentine's Day to me it to me. However, he revealed what was inside the package only a few hours later (he always gives me presents early).

"Rather than a box of chocolates, I got this for you," he said.

My box was full of raw chocolate treats from, you guessed it, oneluckyduck.com. I got a bag of chocolate macaroons (yeah, I know how to make them, but they are even better when someone else does it for you), cacao nibs (now I can make some stuff out of these), goji berries (not chocolate, but I love them anyway), chocolate truffle butter (I put it in my smoothie this morning; it was divine) and chocolate truffles (now, I'm in heaven).

As usual, a couple snack samples were tossed in, too, as well as a pen, which was new to me. My husband was amused by how excited I was by the extras. It doesn't take much to make me happy :-)

Thank you, honey. I love you!

By the way, when I made my smoothie, "777" lit up on my Blendtec. No wonder I'm feeling so lucky. 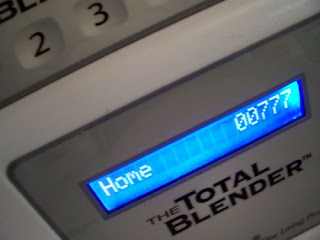 Posted by shannonmarie at 8:19 PM

You ARE a lucky duck. And I think Matthew gets an honorary "Rawdorable" degree, for hooking you up with such a great Valentine's smorgasbord!
Mmmmmm..............xo c

Matthew, I read this out loud to my husband, hoping he'd get the hint about what a wonderful husband should do for his wife for valentine's day!
Shannon's a lucky girl!

awwww. . . how lucky indeed to have someone love and respect your presence in his life to give you the gift of true health and vitality and thoughtfulness. . .
a) he listens to you and what you love
b) he cares about your health and wants you to be in his life as long as possible
c) he considers making you feel loved and valued worth any monetary price
d) your happy smile is the best Valentine's gift ever!

Yes darling girl, you ARE lucky!
xx (and thank you for your sweet words!)
jenny

That's for certain!!! Blessed you! I've always wanted to try their truffles. :0) You make me want to order from Lucky Duck immediately. Unfortunately, no cash to correspond with the order. :0)

I love the fact you're so happy about the pen and the extras...that's just like me, I always get excited about the smallest, most insignificant things. But that just makes life nicer, doesn't it? People who don't get excited, miss out on so much.

juusan, the trick is to drop a lot of hints. By the way, nice catch on my pop-tarts post.

Rawbin, you obviously have the hint thing down pat. I've got my fingers crossed for you.

Jenny, you've really enforced how lucky I am. I could never take my man for granted after those reminders.

Charissa, you have to try the truffles. Start an extra change fund, and you'll be able to purchase them in no time.

You like the little things, too? I'm like the kid with the box at Christmas. Ha ha :-)

Wow, You are one Lucky Wife!
I might have to nominate your Husband for Husband of the Century!
Love your blog, come visit me at debbiedoesraw.blogspot.com
deb

I'll definitely visit. Thanks for stopping by :-)