It must be Groundhog Day ... 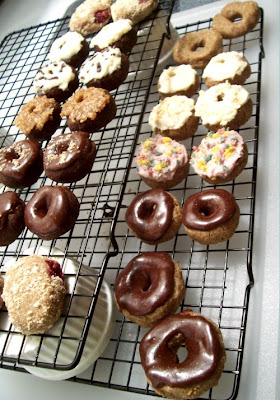 ... because I'm talking about donuts again (Wasn't that the topic of my last post? Oh yeah, I did tell you I'd show you more today).

Remember that movie with Bill Murray, where he kept reliving the same day over and over again? We used to watch it in the video store I worked at as a teen. I saw it so many times, that I began to feel like I was reenacting my own version of the film.

So, here we go again, back to the donuts. This is becoming a weekly topic (usually on Fridays); hopefully, I'm not boring you with them. It's like that Dunkin' Donuts commercial, "Time to make the donuts ... I made the donuts."

Actually, I made them on Thursday, as part of our "Thursday Night Raw" (I think this was our fourth installment). As I said yesterday, although Matthew was ill (thank you for all your well wishes), he ate two of them (pictured in my last post), along with his first green smoothie ever.

His smoothie was chocolate banana (he drank the whole thing), while mine was orange pineapple banana (sounds like we switched smoothies; he could've used the citrus to help his immune system; he's still sick). 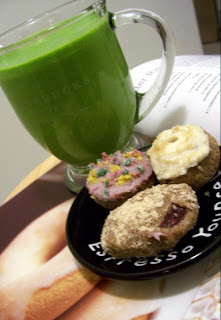 The donuts were something I came up with that day. I made three base recipes (chocolate, plain and something reminiscent of peanut butter), which I shaped (thankfully, I didn't take any pointers from this Swedish chef. I grew up watching the Muppet Show), dehydrated for a few hours on each side and decorated similar to some of my favorites (I had a raspberry jelly donut, pink iced with multi-colored sprinkles and vanilla iced with maple flakes).

I displayed them on my old cooling racks (another creative use for something I don't really need much anymore), just like my own mini Dunkin' Donuts.

I'd give you the recipes today, but I need some time to collect my thoughts (due to the last minute preparation of this meal, I didn't exactly take the best notes). I'll either post them on my blog in the future, or see if Dhru is interested in having them on We Like It Raw this week (if not, I have something else up my sleeve).

My hubby and I spent the rest of our Thursday watching "Billy Madison" and "The Wedding Singer" (there must have been an Adam Sandler marathon on cable, and no, Matthew wasn't interested in the Mermaid movies). I just love the part where Adam serenades Drew Barrymore on the plane at the end (too bad Matthew's uncle had to call in the middle of that part - ha, ha, I know he's reading this. That's when the pause on the DVR really comes in handy).

I just love the '80s. My favorite non-current song ("How Soon Is Now" by the Smiths, although its been covered quite a few times) is from that decade (doesn't everyone have an older and a more recent fav?). It's also on "The Wedding Singer" soundtrack.

Speaking of the '80s and music/movies, remember how I posted about Kevin Bacon? Did you know that post was mentioned on a website dedicated to everything related to bacon (of course, I can't find it now that I'm looking for it)? I don't even consume the stuff, but you can enjoy the flavor in this dehydrated snack on the Sunny Raw Kitchen site. Watch out Carmi, you'll be next on the bacon blog. 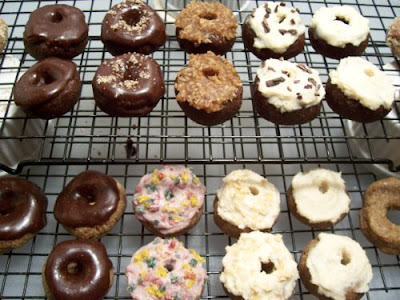 Posted by shannonmarie at 11:15 AM

Justin and I both love that movie very very much. Bill Murray...ahh, just thinking about him makes me smile and laugh!

You know chica, I just have to say that I am loving your posts lately. I'm not going to ruin my feast and dig into those lovely donuts of yours, but when I am done, I will certainly have to make them!

Hi Shannon! My friend just told me about you and your blog and I am sitting here on my computer with my jaw to the ground (either it's because I am so impressed with your blog or I am just salivating at your recipes!) You go girl! Love your stuff. I just posted about you on my blog - I so want everyone to know about your site. I hope that's ok. Take care girl!

Mmm we can never get enough of your donuts!!!

I have nominated you for a Creative Blogger award :) check it out

actually, i was a better gardener when i was three than i am now. . . i also can't seem to keep things alive, but lucky for me people around me can- so i benefit from the fruits of their labours (and i keep trying to coax my green thumb to reemerge!!). . .

i adore the smiths (but of course you probably aren't surprised!) as well as the old muppet shows (my dad used to entertain me with his impressions of the swedish chef, until i was rolling on the floor with laughter). ..

your donuts are incredible looking- i really am constantly amazed by your creativity and the cleverness just flows from your magic fingers doesn't it?!

have a lovely weekend. . . and by the way, everyone i showed your girl scout cookies to, now won't stop hounding me to make them- so i'm guessing it's experimentation time soon!
xx jenny

I am so glad I found your blog. You are inspiring! Thanks for all this great info. I'm just starting a raw diet, I've done it for 10 days so far. And it's amazing how I feel. I'm a new girl.

Can I move in?

WOW! Those donuts... Once more, you are AMAZING!
Adopt me? Mommy?
We watch Groundhog Day every year and yesterday was no exception to our tradition. Anything with Bill Murray will get my husband into the room.
I'm sorry Matthew isn't better yet. I thought he'd be up and around by now. That's great that he drank the entire smoothie! I can only get my family to try little sips.

Thanks for the well wishes, Heidi. I'll definitely pass it on. Good luck with the juice feasting. You're doing a great job so far.

Yippie! Wonder Woman came to visit me. And, I thought you stopped blogging. I'm so glad you're back.

Raw Vegan Londoner, thanks for the award, and congrats on yours, too. You really made my week.

Jenny, we have more and more in common, but I'm no longer surprised. Good luck with the cookies. And, by the way, I nominated you for another award.

momintx, congrats on your first 10 days. Here's to 10 more, and many more after that.

Linda, you gotta ask my hubby about that one. I've had several requests :-)

Rawbin, you've been doing an excellent job involving your family, even better than I have.