"Who lives in a pineapple under the sea?" 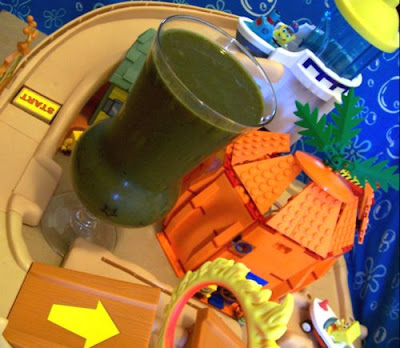 Spongebob Squarepants, of course. My son has been collecting this crabby-patty-making character's Lego playsets lately, so he can reenact the videos he's been watching on You Tube. Looks like I have a future filmmaker on my hands.

My sister, Lori, and her husband, Darren, went to school for this art. In addition to their regular jobs, they put their skills to work on the weekends as videographers. Lori even posted a couple videos online. This one of her eldest son playing ping pong with my grandfather still cracks me up. He's grown up a bit since then; here he is again in their Heinz Ketchup commercial entry last summer.

The parents in the commercial are actually mine, and the sister in it is his aunt/my other sibling, April, whose birthday is today. She's the one I've mentioned before when I wrote about her allergy to raw fruits and veggies.

Kathy, you were right when you suggested she be tested, since it might not be to all raw fruits and veggies. She has yet to see an allergist about it, but due to her own daring impulsiveness, she discovered recently that she can eat raw pineapple (Look out Spongebob; April's moving in on your territory).

So, in honor of her 22nd b-day, I added pineapple to my berry green smoothie this a.m. (the berries make it look a little more sludgy and a tad bit seaworthy. I wonder if she can eat berries, too). Dee (the "pyt" always makes me think of this song), I know you spied Patrick the other day, but can you spot my smoothie? Ha ha. Just kidding. I didn't hide it very well.

Anyway, I've got to go make a grocery run to get more pineapple for tonight's dinner. April wants chicken wrapped in bacon on skewers (they also have pineapple on them) for her birthday meal, so I'll be having raw vegan skewers in their place. Hopefully, you'll be enjoying a meal together with your family tonight, too.

Happy birthday, April!
Posted by shannonmarie at 11:34 AM

I'm glad she is being tested! There may be a whole bunch of things that she can have! Happy Birthday April!

I know that song all too well!!! My 2-1/2 yr old daughter calls him "Sponge Pants" or "Sponge Sponge"
What is it about a Sponge that is so intriguing to little ones? :)

Spongebob isn't just for kids! I swear it. That show is funny...

That being said, I hope the vegan skewers are fantastic, and pineapple! Love it!

Shannon, checked out the videos - your family is really cute!

Kathy, thanks for wishing my sister a happy birthday. I will pass it along.

Rawleen, it's funny how kids are drawn to that cartoon sponge. His name was one of the first things my son learned to say.

Dee, I agree. I watch it even when Jacob isn't in the room.