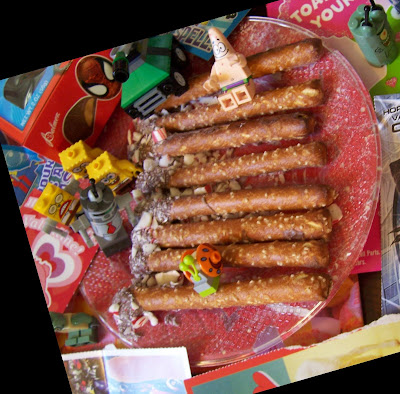 I know; this is like the most annoying joke in the world, but I thought it was the funniest thing I'd ever heard the first time my mom and dad told it to me. I think I must have shared it about a zillion times myself after that.

Now, I even catch my son trying to tell it, although he doesn't quite get it right. At least he finds it funny anyway, which in turn, makes me laugh, too.

I have so much fun hanging out with him. He amazes me everyday with how much he can do, including learning how to use the camera all by himself. He even stages his own food photos (I wonder where he learned that one).

Speaking of my son's photography skills, I promised him I would post his pic of the pretzel stick treats he made for my husband and I at school yesterday. It was a visual Valentine's gift for me and an edible one for my hubby. Looks like I have a future blogger on my hands.

Maybe, since I decided to take a break from my usual end-of-the-week (TGIF) donuts for a while (I've certainly had my fill), I'll start reserving Friday posts as a place to showcase his photos and to tell you what's in my smoothie that morning. Today's has spinach, bananas, oranges (you're probably not surprised), carrots (I don't know where that craving came from), coconut butter, lucuma, vanilla and pumpkin pie spice. Yummy!

Orange you glad it's Friday?
Posted by shannonmarie at 7:30 AM

you are too scary sometimes missy. . . i'm currently enjoying a bowl of orange, banana and date all chopped up and eaten with chopsticks. . . and these are not my daily foods at all. . . (insert twilight zone music here)

that was one of my favourite and most repeated jokes as well. . . i love that kids still crack up over it!

i made a soup last night with freshly juiced carrot, sweet potato and other things. . . but thought how lovely it would be as a juice with ginger and, yup you guessed it, pumpkin pie spice.
crazy.

enjoy your friday, we were getting heavy snow earlier ( i didn't sleep due to the cacao intake yesterday!), but now it's just lightly dusting-
xx Jenny

I used to laugh at that joke as if it were the funniest thing ever known to man.

I love when kids laugh, it's rather infectious. You just can't not smile when you hear that giggle. At least I can't, it melts my heart.

Jenny, I'm hearing that music frequently, usually when I visit your blog.

Wow, you've gotten a lot of snow this year. Go easy on the chocolate, girlie girl.

Dee, I know what you mean about those infectious giggles. They keep you young.

Also, I'm glad you enjoyed my son's personal touches in the photo. I didn't know how people would respond.