Another sundae on a Thursday 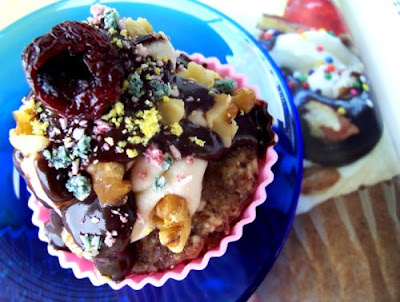 You would think I'd have the timing right by now, but somehow this sundae still ended up on the wrong day. Don't you think Sunday would've been more appropriate? 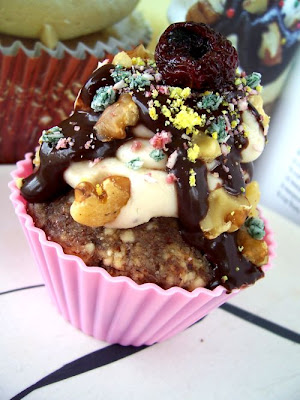 Oh well, I just thought you waited long enough, so here is the final cupcake from last week's unbaking extravaganza (although I did make two more with the leftover ingredients; they'll be making an appearance soon). It's the other banana cupcake I mentioned in yesterday's post.

Also from "Vegan Cupcakes Take Over the World," this over-the-top concoction is a rawified version of the Banana Split Cupcake from the book. Using the same raw banana cupcake base as "The Elvis," this non-frozen treat has it all, from its creamy vanilla swirl to the cherry on top.

And what sundae wouldn't be complete without not-hot fudge, chopped walnuts and colorful sprinkles?

If you missed it the first time, here is a quick review of how I make tinted coconut flakes. All you have to do is make a dye out of agave and whatever you choose to make the color (turmeric for yellow, berries or beets to make a rosy hue, spirulina or liquid chlorophyll to make green, etc.), mix it with coconut flakes and dry thin layers of the mixture in your dehydrator. Then, break it or grind it up and sprinkle it on your favorite sweet creations.

Now, since I've had so many requests for more recipes, here is how you make the banana cupcake base. 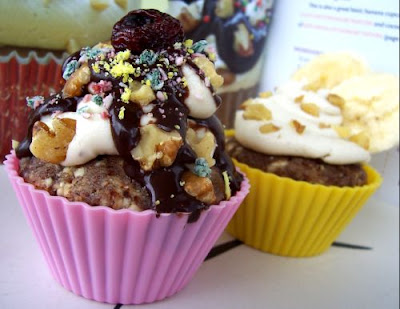 Banana Cupcakes in the Raw x 2
This recipe was made in a small batch, as I was creating multiple variations of cupcakes at once. Feel free to expand the recipe to suit your needs.

In a small bowl, combine the nut flours, cinnamon and sea salt. Stir with a whisk or use an electric mixer.

Next, add the mashed banana, about 1 Tbsp. of the date paste and a touch of vanilla. Whisk/mix, paying close attention to the consistency of the batter. Add agave to taste, and more of the date paste, as needed. Whisk/mix to combine. The batter should be moist, but not so damp that it requires "baking" in a dehydrator (although you could if you desire).

Divide the batter in half to make two cupcakes. Form them into cupcake shapes, and decorate to your hearts content.

*Chocolate Chip Banana Variation: add cacao nibs or chunks of a raw chocolate bar to the batter before forming into cupcake shapes.
Posted by shannonmarie at 8:51 AM