Wake me up before you cocoa 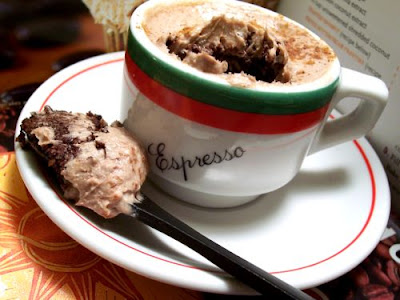 Like mochachino, chocochino. You know; something to wake you up before you go go (that's a Wham reference for those of you who are too young to remember). 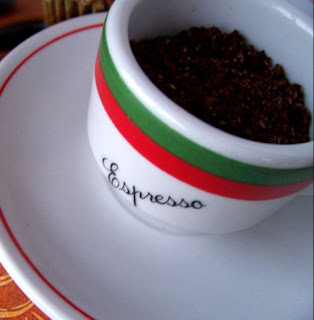 Anyway, nearing the end of my cupcake kick, I decided to make one with a kick of its own in a slightly nontraditional fashion. This raw cake is actually served in a cup.

Now, I gave up coffee years ago, but still make room for a substitute every once in a blue moon (what color is the moon now? That reminds me of the line from the "Great Muppet Caper," when Kermit says they're gonna catch the thieves red-handed and one of the muppets responds with, "what color are their hands now?") Sometimes I perk myself up with raw cocoa, maca or yerba mate, but other times I just opt for the similar aroma and taste of Teeccino.

This time, I awakened all of my senses with a combination of raw cocoa powder, Java Teeccino, cinnamon and cayenne pepper. I added these ingredients into the following raw cake recipe and topped it off with some leftover raw whipped icing/cream flavored with a tad more cocoa. A sprinkling of cinnamon, and you guessed it, more cocoa powder make this treat reminiscent of those found at your local coffee shop, minus the coffee. Here's how to make your own: 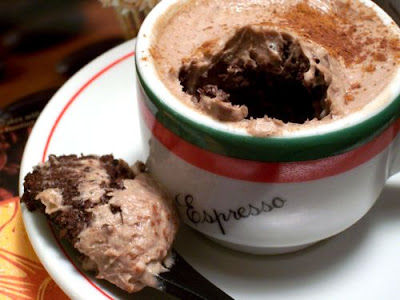 In a small bowl, whisk together the almond flour, cocoa powder, Teeccino, cinnamon, cayenne pepper and sea salt. Add the coconut milk and agave, and mix to combine. Adjust the amounts for both flavor and texture. The mixture should be damp, yet still crumbly like a cake.

Divide the mixture between two small espresso mugs and gently pat down the surface. Top off both mugs with some raw whipped icing tinted/flavored with a touch of cocoa powder. Garnish both mugs with a sprinkling of cinnamon and more cocoa powder.
Posted by shannonmarie at 8:30 AM