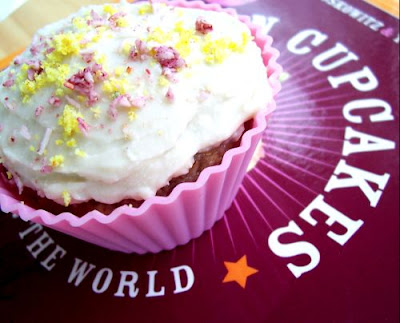 For those of you who are tired of my raw cupcakes posts, here's a heads up that there's more to come. My hubby thinks I should be sick of them by now, but even after scarfing down way more than my share, I haven't had one belly ache. 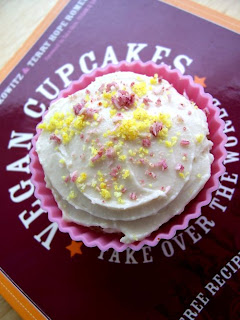 In fact, my tummy just keeps craving more. They're a habit I'm not willing to break, and I am not alone. Just consider all the sites dedicated to this cupful of deliciousness.

Speaking of cupcake websites, I was excited to find my rawtess cupcakes featured this week on the Cupcakes Take the Cake blog. It was an honor to be recognized by these cupcake bloggers, who have made an appearance on Martha (maybe I'll get my chance, too, someday).

If you're already a cupcake fan, you are definitely familiar with Isa Chandra Moskowitz and Terry Hope Romero's "Vegan Cupcakes Take Over the World." Actually, how could you not know about this cupcake extravaganza of a book if you've been reading my latest posts? 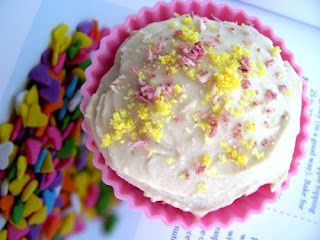 Now, I have to admit that I have baked quite a few recipes from this collection, but now I've got a little out of control rawifying many of them. You see, I already made a raw version of the well-known S'mores Cupcake, and today I tackled six more mini masterpieces, which I'll be sharing with you in upcoming posts.

To start, here is a basic raw vanilla cupcake with whipped vanilla icing and multi-colored sprinkles (you may remember them from my donuts). Simple, yet scrumptious, who could resist this pretty in pink treat?

Now, if you are looking for something more elaborate, stay tuned for more cupcake fun. Here are the other naked cakes (so that's what has been hiding underneath all that icing). Don't worry; I didn't really bake them. I just got a kick out of taking a pic in the oven :-) 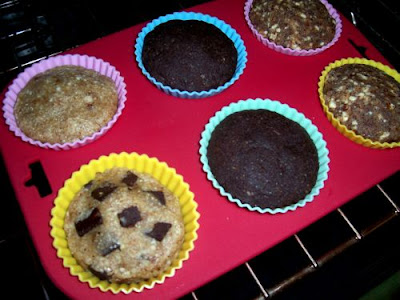 Posted by shannonmarie at 4:20 PM