From Oprah to Kevin Bacon? 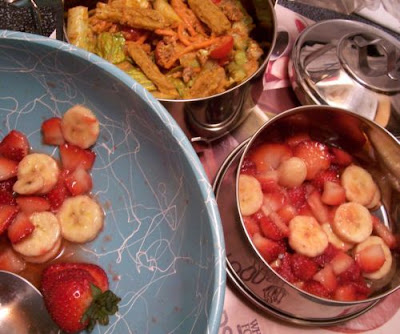 You've gotta read the whole post to make sense of this title.

If you haven't noticed yet, Rawdorable can now be seen in two places at once. Whenever I add a blog post here, it also gets posted (although more like a teaser, which takes you back here) on the We Like It Raw Quickies page (Philip and Anthony's blogs are also getting the same treatment; check them out, and tell them I sent you).

So, that means, I'm syndicated. I'm like Oprah (like I really needed to add that link). Okay, maybe not Oprah, but it was the first show that taught me what it means to be viewed in syndication.

Uma, as in Uma Thurman, was once married to Ethan Hawke, my celebrity crush growing up. I was a huge fan of his in Reality Bites (I once danced around to "My Sharona" in a convenience store, like in this clip from the film) and Before Sunrise (one of my all-time favorite movies; here's a cute scene). 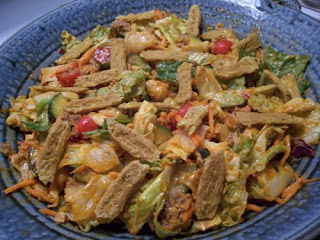 But did you see him in the follow up, Before Sunset? I enjoyed the movie, but not as much for the eye candy as I did with the first film. I think my past love could have benefited from a raw diet.

My husband, although not raw, is at least making attempts to try it, like with our new "Thursday Night Raw" tradition, where he has agreed to eat a raw meal one evening per week. This past Thursday (I know you've all been curious about the menu), I made a raw version of my mom's taco salad, a recipe that was really big in the 80's (This is the basic recipe everyone made at the time).

It was pretty simple to "rawify." Of course, I had the lettuce and tomato, and I swapped out the onion for cucumbers (Matthew isn't down with the onions). Then, I added some walnut taco "meat" and shredded carrot instead of cheese.

Like the original, the whole salad was tossed in a Catalina dressing, although I made a raw version. Here's my rawified dressing recipe:

Blend all ingredients in blender until smooth.

I also sprinkled the top of the salad with some mock Frito's, I made in my dehydrator. Although not the most photogenic dish of my blogging career, it really tasted a lot like my mother's, which in my book, made this one a success.

Matthew, on the other hand, would beg to differ. But, I do have to say, he was a good sport for finishing his whole bowl. He liked everything in it, except for the dressing, which he neglected to inform me was something he didn't even like prior to my rawifying it.

According to him, he's not fond of the orange dressings, usually opting for Caesar (Caesar salad is his fav), Ranch or Blue Cheese, so I won't take it personally. Hey, at least he tried it for me. 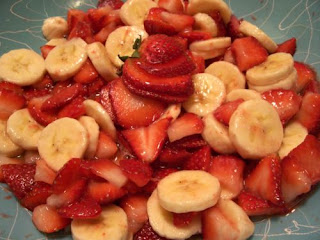 I tossed the fruit in a bowl my grandmother gave me when she moved. At the time, I told her it looked like something Rachael Ray had in her "30 Minute Meals" kitchen on t.v. To my surprise, I actually saw her use that same bowl on her show on numerous occasions. One time she used it to make scones.

But now, I am just typing in circles with no end to this post in site. So, I'll leave you with one more example of what goes into my crazy thinking process. One thing leads to another just like that six degrees of Kevin Bacon game (You can link any actor to him in six role links or less). Let's play one quick round.

Oprah Winfrey was in The Color Purple with Lawrence Fishburne, who was in Mystic River with Kevin Bacon. Too easy.

P.S. My Thursday meal packed well for my lunch yesterday, as seen in the top pic. Delish!
Posted by shannonmarie at 4:30 AM

Once more, great photo's, yummy meals, (will you adopt me?) great descriptions, and finally, entertaining script. I noticed that right after you were talking about "eye candy", you move directly on to talk about your hubby...

i just read your blog. . . loved it as usual and then bounced (on my exercise ball too -ha!!) over to mine and read your latest comment. . . that's too funny about the movie and the title ( i hadn't made the connection at all, but it's one of my favourites too, and before sunset as well, i could watch that over and over. . . and agree about ethan hawke not aging particularly well, could DEFinately benefit from a raw diet- that made me giggle!)

It's so funny how our minds appear to be weaving along the same parallel path. . . i love synchronicities like that and no matter how isolated physically in the world we happen to be, there are always, always others out there right in tune with us!!
I'm off to make tirimisu for tomorrow night's sushi dinner dessert. . . treating my family and a friend stopping by to a little piece of heaven!!
xx jenny

Thank you for the recipe! I've never tried catalina sauce, but I have wanted to. And this sounds delicious. =)

Thanks for the blogger award, Shannonmarie! You're so sweet.
It really ceases to amaze me how you always get such great pictures. :0) (our camera is bugging me at the moment, it's a little old, lol)

Ok....you couldn't be anymore darling. I mean it. Much cuter than MaryAnne on Gilligan's Isle. Your writing style is such a delight to read and I always leave your page inspired and read to roll up my sleeves and create something phenomenal! Thank you, once again!

he was okay. but i was always more of a johnny depp girl.

I have a quick question for you! What is your favorite use for the wet almond meal left over after making almond milk? Do you have a favorite recipe for the stuff?

Girl, you are so much fun!

Thanks Rawbin, for the compliments and the correction. Yeah, I still consider Matthew to be eye candy, even if he's not raw.

Jenny, I'm bouncing on my ball right now, too. Sounds like the movie is another thing we have in common, which reminds me, I heard a song from the "Stealing Beauty" soundtrack when I was at Chipotle last night. Thought of you, of course.

Romina, how did you like the Catalina dressing? It's one of my dad's favs.

You're welcome Charissa. You deserve it. I hope you camera cooperates soon.

Thanks Penni. I didn't know you were in Carol Alt's book. I was flipping through it in a book store last night and was like, hey, I know her.

Alissa, you know Ethan was hot back in the day, but I do agree with you about Johnny Depp (although I prefer the 21 Jump Street model).

Juusan, I don't actually make strained almond milk very often (I get lazy and leave it as is), but when I do, I either make crackers out of it by mixing in some ground flax and adding my favorite seasonings (shape and dehydrate, of course).

Otherwise, I just dry it out as is to use in cookie and other usually "baked" goods. However, I think it loses some of its flavor in the milk, so I combine it with finely ground almonds.

Oh, Great. There's going to be a fight tonight. I just made your Raw Catalina dressing. I've got a feeling that the wife is going to change her mind about not liking Catalina Dressing. I don't care, I'm not sharing. She can make her own just like I did! Yeah, like that's going to work.

Bob, I'm glad you liked the dressing. Maybe you can share a little ... or maybe not. I get a tad bit greedy sometimes, too.