Naked donut holes in the shower for breakfast 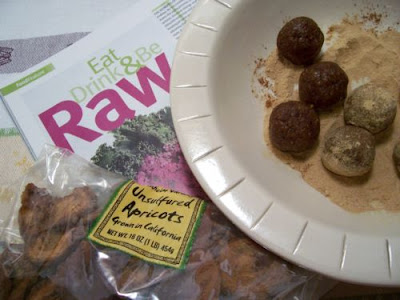 Did I get your attention? That's what happens when I run two thoughts together. I've been known to do it quite often, and have even been corrected for it in a comment on this blog (I accidentally typed "my husband's wife" instead of "my cousin's wife;" it's now fixed and the reasoning for my error is in the comment section. Thanks ~Melissa, yet again, for pointing it out). 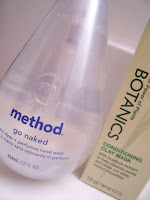 When I ran out to get more of my facial mask (I use Boots Botanics Conditioning Clay Mask on a regular basis, but I also try to get Lush's Cupcake whenever I'm lucky enough to make it to one of its stores) yesterday, I also came across Method's "go naked" line. I picked up the fragrance-free hand wash for now, but don't be surprised if I purchase more of the products in the future.

I already use the daily shower spray in between bathing sessions to keep my shower fresh, so I could easily see myself using another "naked" product to actually clean the shower/tub. At the moment, I use Biokleen. However, a product with "naked" on the label seems much more appropriate for the occasion (don't tell me you've never cleaned your shower/tub in the buff).

But enough about that. If you want more information about Method's products, check out this interview on G Living. 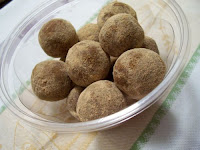 Now, on to breakfast (fully clothed). You guessed it, donut holes (that photo at the top is like deja vu). I made the Ani Phyo ones featured in VegNews again, but with my own spin on them. I used apricots instead of bananas and added some cinnamon for a little spice. I also rolled them in a mix of mesquite powder and a little more cinnamon, instead of the coconut listed in the original recipe (maybe I'll need another shower after eating these).

The result was pure bliss. What a great way to start the day. Enjoy :-)

By the way, you might want to double check your dried apricots for pits before putting them in your food processor. I had a stray one clunking around in mine. But, if you don't catch them all, they won't harm you; apricot pits actually are very beneficial. Check out this discussion.
Posted by shannonmarie at 3:55 AM

I love the way you write :)

Oh, and my boyfriend takes my pictures...he also built my website :) I'm lucky!

You are very lucky to have a man like that and your natural good looks, too.

My husband works with computers for a living, but has had no part in this blog (except to laugh at my mugshots). I've even taken my own photos, which explains the crazy angles. Wow, I look weird, but it is funny :-)

OK. I've been meaning to make Ani's donut holes for ages, but this is it! I'm trying these tonite!

You mention that the recipe calls for bananas. Must be a different version than the one posted on her blog then (almonds, salt, vanilla, pineapple, dates, dried coconut). Dang. Guess I'll have to wing it. ;-)

Carmella, I feel so honored that you commented on my blog. I didn't realize you were reading it. Thanks for the icing recipe and the others I have tried.

The donut holes in this post came from the revised version printed in the VegNews recipe. The original does call for pineapple. I actually preferred the bananas.

I hope yours turned out tasty. I'll check your blog for the results.