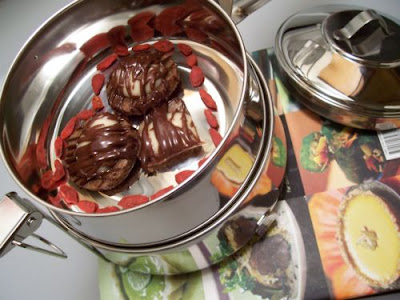 Raw mallomar love that is. Yes, I'm still raving about them. Even if my version tastes nothing like the original (which at this point I can't make a true comparison until I actually try a PF&W one), I am more than satisfied with my efforts.

And so are some of my taste-testers. It wasn't easy giving up any of these marvelous morsels (they are a little addictive; I can't tell you how many I ate by myself), but I wanted to share the results with those I love :-)

Now you would think this would include my husband, but he never cared for the cooked variety. I did, however, take some to his parents, along with a raw mint chocolate brownie for his mom. She tried the brownie and seemed to like it, at least enough to finish it. This is a big achievement since she has always claimed to dislike nuts.

I also brought some into work for the ladies to sample. Of course, Rawbin liked it, but as you know, she is into the raw thing, too. I even had positive reviews from the non-raw tasters.

Rawbin returned the favor with raw brownies from her two experiments with my mint chocolate recipe. They turned out different than mine (she added spirulina to one of them and pecans to the other), but they still were good. 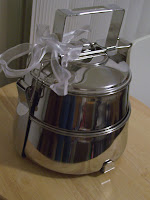 We both have been bringing our raw treats to share in our To-Go Ware. Rawbin got hers at the D.C. Green Festival in October, and I got one for Christmas from my mother-in-law (I'm lucky to have gotten a good one; in-laws get a bad rap sometimes). I don't know what I ever did without it.

I'm so happy to be sharing my love of raw food with others. It is becoming contagious. My husband has even agreed to eating one raw meal a week to help me keep my resolution (to prepare a raw meal at least once a week for my household), as long as I uphold my end of the bargain (he has a resolution, too; I can thank Dr. Oz for that one ... now if I can only get him to drink his green juice).

Tomorrow night, we'll be having a raw ice cream sundae buffet, complete with all the fixings. That's the beauty of raw; you can have dessert for dinner. Besides, I need to take baby steps to get this idea to fly.

I also hope to bring a spread of raw appetizers to Sunday dinner this week (my side of the family gets together every Sunday for a sit-down meal). We usually dress up in formal wear and have h'orderves while watching awards shows (we are so cheesy; we even have a red carpet) like the Oscars, Emmys and Golden Globes, which were unfortunately canceled due to the writers strike. I hope we do something fun anyway.

Speaking of the writers strike, it has really increased the appeal of reality/game shows. Did you see American Gladiators the other night? I heard competitor Koya Webb is a raw foodie. On the show she stressed the importance of a diet loaded with fresh fruits, veggies, nuts and seeds. You go girl. Now that's spreading the raw love :-)
Posted by shannonmarie at 5:33 PM

I love what you do with your family (red carpet and all). We need more of that in our culture.

I love your to-go ware! Transporting lunch to work has always been one of my obsessions. I'll have to check that out in April when all I'll want to be eating is big salads all the time. A good non-plastic option is very compelling.

Kristen, my family has been making an "event" out of award ceremonies for years. It's like tradition. I hope me putting the idea out there gets others to do the same or at least spend more time together.

Raw B, you've gotta pick yourself up a lunch pail. They are perfect for raw foodies.

Alissa, I am making some progress with my man. I hope tonight goes well. I'll keep you posted.