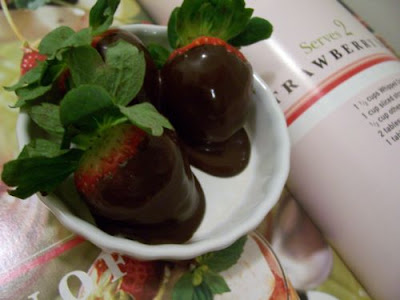 I know, these aren't donuts. They are, in fact, strawberries. And no, I didn't just throw any non-related title up there (although Courtney contemplated the thought of using post titles that had nothing to do with the topic). I'll get to the donut holes in a minute.

But first, I wanted to show you the chocolate dipped strawberries I made with the leftover ganache from our sundaes last night (These would've been perfect for the Golden Globes). SO GOOD! Am I the only one who actually loves leftovers?

Now, back to the donut holes (sorry that I took so long to post about them, Raw Heathy. She's my new friend on Give It To Me Raw. You should join, if you haven't already, and give her a proper welcome).

Most mornings I have a green smoothie for breakfast (like this Freaky Tiki I had yesterday), but on Fridays, I celebrate the end of the workweek with some form of raw "baked" good for my a.m. meal. For a while it had been cinnamon rolls or granola, until I decided to change things up a bit with variations of a popular donut hole recipe.

I first mentioned them on Dec. 26, when I blogged about the banana ones featured in VegNews magazine. I had made them for Christmas brunch. I also concocted an apricot version last week (Carmella, I hope yours turned out okay).

This morning I really put a new spin on the basic ball of "dough," with some inspiration from Rawvolution's Shake Your Money Maker smoothie recipe (which is really similar to another GITMR friend's Superdude Superfood Smoothie).

I used almonds, walnuts and pumpkin seeds for the nutmeal part, with the addition of mesquite, raw cacao powder, maca, crystal manna, sea salt, cinnamon and cayenne (Phillip, you really are the Cayenne King; you'd never guess all the ways his majesty uses this hot spice). Then, I added dates, goji berries and vanilla, and processed it until my food processor shrieked in anger (Kathy, you're not the only one who has felt this appliance's rage). 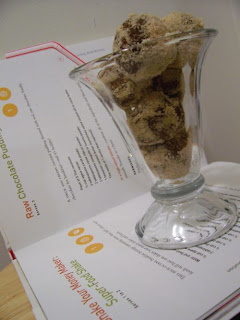 By this point, all the ingredients had been incorporated into a ball of dough, which I pinched off into pieces, shaped into bite-sized morsels and coated in a mixture of ground coconut and lucuma (like I used in my Russian Raw Cakes recipe).

All this resulted in some super-charged balls (get your mind out of the gutter; I'm referring to the superfood-filled donut holes).

I wonder what readers Googled to find this post. Angela Stokes asked this very same question on her blog a while back, around new years. She mentioned something about Poland and raw cacao, and organizing a chocolate party in Poland. I happen to be Polish and had a chocolate menu to celebrate. Strangely coincidental.

Anyway, these super donut holes were the best tasting so far and powered me through my day. You've gotta try these.
Posted by shannonmarie at 4:45 PM

your freaky tiki looks exceedingly freaky. or at least it's more green than the video. that looks good!

you are the green queen!
i'm getting my vicarious dessert fix off your site while juice feasting. those strawberries look amazing!
xx carrie

Alissa, the color of this concoction when I make it really is freaky. I used a whole orange in place of the juice, coconut meat and way more greens than in the original recipe. I tend to get a little crazy with the greens.

Thanks for the catch. I hope my goddess friend can forgive me. Can you believe I used to be a newspaper editor? That was years ago, so I'm a little rusty.

Carrie made a comment. Yippie! You are the juice feasting queen.

So funny you were also whipping up some donut holes yesterday too. Wait til you see what I've been up to at my end (will be reporting all about it in an upcoming post!) Hum, I'm thinking that perhaps I should name it "Ode to Shannonmarie's Yummies"... But I'll say no more! ;-)

Ooooh, super raw balls....I love the name...heaps of goodness packed into them!

Haha...ah, how did you forget my name?! No worries - a lot of people think that its "HeaLthy" - and yes, of course I forgive you :)

Now lets see...the raw balls, the vanilla cream, and mallowmars. The list is piling up!

you really are too adorable, aptly named blog in so many ways, your posts always make me grin and simultaneously make my mouth water. How DO you have time to do it all, can i start calling you wonderwoman?!
i'd missed everyone's thoughts and musings and posts while away, glad to be back and i'm still searching for how your mallomars came out, must keep reading. . .
xx jenny

Carmella, I can't wait for your post. I already hopped onto to your blog to check. Nothing yet. I need to practice patience.

Raw Goddess, I'm so sorry. Glad to hear I'm not the only one. I think it is an easy mistake since we only read about each other and never actually hear the person say what is written. Sometimes I just read what my mind is thinking; it's thinking "she looks really HEALTHY." Thanks for your forgiveness :-)

I feel the same way about the food lists piling up. I'm always planning on making the recipes I see on other peoples blogs or in books I've received, but there are only so many hours in a day (and I can only eat so much).

Hi jenny. I really have that kind of effect on you? You can't call me Wonderwoman, because it is already taken in another blog. But, thanks for the compliment.

The mallomars were a hit. Check out the Jan. 8 and 9 posts.