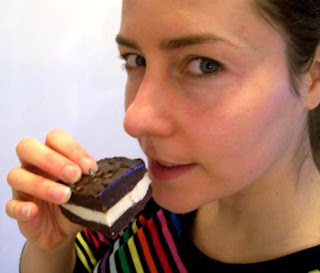 If you haven't heard already, I've been playing around with the idea of writing a book. However, I may be having some second thoughts (so much for that resolution).

I guess I am just a little overwhelmed with all the raw recipes that are out there already. How do you call a recipe your own? I mean, where do you draw the line between what is truly an original idea and what is just another take on someone else's? Isn't that what creating new recipes is all about? You take what you already know, the basics per se, and use them as the foundation or building blocks to construct what it is you're craving at that moment.

It's like in baking; many years ago, someone came up with the tried and true formulas for producing light and fluffy cakes, crispy or chewy cookies, and dense, yet moist, muffins. The majority of the recipes since then just take those basic ratios, techniques and baking times, and transform them into updated versions. What was once a plain butter cookie was transformed into the chocolate chip variety we know today, when Ruth Wakefield decided to cut up some chocolate bars and add them to the dough.

The same is true in the raw world. Once you discover some of the basic combinations of ingredients, techniques and ratios, you can use them to make almost anything you can imagine - the possibilities are endless.

That is why I didn't want to make the usual gourmet "uncook" book, but an instruction manual for how to get started "rawifying" your own recipes with examples of how I've put some of my favorites together.

Due to popular demand, I'll strip down my "million dollar" brownie recipe as an example. Rawbin offered up that much money (not that she actually had it) for the recipe, but I gave it to her free of charge. Besides, it's not truly mine to sell.

I owe the best part of the unbaked creation to Carmella of the Sunny Raw Kitchen. Yet again, I started with her outstanding whipped icing recipe (I hope she doesn't mind). It's just so versatile.

I started out making this icing (you definitely need a good icing recipe in your collection) to top these cupcakes (my photography skills have improved a little since then; this was one of the first times I used this camera) or to ice a raw cake (this is how I used the leftovers from the gingerbread house icing). I've also used it to top these cinnamon rolls and ginger creams.

As Carmella says in her post, "You should have extra whipped cream but I'm sure you'll find other ways to use it. lol," I've definitely found my share of other uses. I would always end up with leftovers, and being that I am not the type to let anything go to waste, this recipe quickly became the base for further ideas.

In the brownie recipe, I just added some mint extract (I like to use Frontier brand) to the fully thickened leftover icing and used it as the mint layer (in place of peppermint patties in the original baked version).

The brownie layer is another basic ratio/technique you should know for "rawifying" your own recipes. When you combine right amount of nuts (select according to flavor, color and texture to achieve your desired result) with a proportionate amount of dried fruit, you end up with the base for almost any cookie, cake or bar.

Who came up with this ratio/technique? I couldn't tell you, but I see it all the time in various raw recipes.

These brownies are topped with a quick and easy icing, something I make all the time without a recipe, but I'm sure I wasn't the first to think of it. I refer to it as the "lazy girl's" idea of frosting. I just combine a raw nut butter with sea salt to bring out the flavors, vanilla, sweetener (usually agave, but you can also use grade B maple syrup, yacon syrup, honey, etc.) and cocoa powder, if you want a chocolate version.

This is great to eat by itself to conquer a chocolate craving in a hurry (I've referred to it as my "pot-0-chocolate"). But, depending on the consistency, it has many uses. A thinner version makes a great dip/fondue, brownie glaze or drizzle, while a thicker version (like when you use the bottom of the nut butter jar that wasn't mixed well) can be made into chocolate candies and even rolled into balls to freeze or press into cookies.

If you still need some instruction on how to make and assemble these delectable treats, here is the recipe you've all been waiting for ... drum-roll please ... 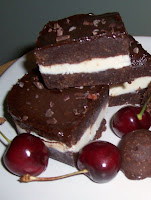 To make the brownie portion of these layered unbaked goods, put half of the almonds, walnuts, cocoa powder and sea salt in the food processor, and grind until fine. Then, add half of the dates, cocoa/coconut butter and vanilla, and process until a ball of dough forms.

Remove the dough from the food processor and press it into a small square container. Then, top this first chocolate layer with about the same thickness of leftover icing mixed with mint extract. Allow to set in the freezer while you make the next layer.

Using the other half of the nuts, cocoa, cocoa/coconut butter, vanilla and sea salt, repeat the first paragraph of directions to achieve another chocolate ball of dough. Form this dough into a square, about the same size as the bottom layer (I used the lid to my container as a guide) and place it on top of the icing layer. Gently, press it into place without squishing the icing layer.

Mix up a quick and easy icing using about 1/4 cup of raw almond butter, 1-2 Tbsp. cocoa powder, a dash of sea salt, a little vanilla and enough agave to achieve your desired consistency. Then, spread it on top of your brownies and sprinkle with raw cacao nibs. Store in freezer until ready to serve. I cut mine into 9 satisfying servings.

Well, there you have it; my mint chocolate brownies stripped down to reveal the basic elements to creating these gems. It was only fitting that I take a pic, stripped down, makeup free with my striped delight.

I'm amazed at how many times I've showed my "bare as the day I was born" face on this blog, when I rarely leave the house without a touch of mascara and a hint of gloss. I must be getting more confident with my new raw glow :-)
Posted by shannonmarie at 5:13 AM

Ummm, I think I'll make these today, they look so delish!!! Bless you!

Good luck with the assembly. Rawbin e-mailed me to say she was running into some issues, but that they still taste good ... isn't that what really matters :-)

My only complaint was that I don't own a food processor. I can see now that I'll be shopping around for one, because now that I have made these, I'll never go back to store bought again!
I'm thinking that I could make these more portable for snacks if I pinched the edges shut to keep the whipped cream contained.

Yay! she posted the recipe! Thanks shannon, can't wait to try these!

Whimper... I'll have to wait. I started a new round of The Raw Divas' Body Enlightenment System, today. The focus will be on monomeals for the next 30 days!!! [sigh]

I was noticing the thickness of your brownies... what size is the container you use to shape them?

Sorry Keely that I took too long to post it. Now you have something to look forward to as a reward at the end of your 30 days (less than that now).

Rawbin, I not sure of the actual measurements of the container I used, but I can say it was only slightly bigger than one of those square Gladware ones.

I am new to reading your blog, and I have to say, I love it! You are SO creative and talented! I'd love to see you put out a book, but more than that... I'd love for you to actually put out a RAW clothing line... I love your tanks! "Be cute, eat fruit.." Come on-- that's great!No, it's (Raw)dorable!

Thanks, but I can't take credit for the "Be cute, eat fruit" line. It is actually on a shirt that's sold on a fruitarian site, and the lettering I used for "(RAW)DORABLE" was inspired by the Red line at the Gap.

Most of my shirts are original, but with a few exceptions. My husband and other family members have been trying to get me to do something with my talents (so they say) for years.