A million and one milkshakes 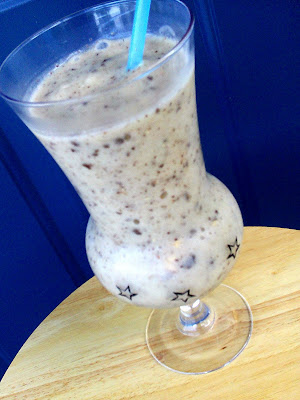 Minus the actual milk, of course. Then, make that a million and two.

The past couple weekends, I've been watching "That Morning Show," while providing Hayden's first (and probably second and third) breastfed meal of the day (she cluster feeds in the a.m. to make up for the lengthy stretches throughout the night). That's where I witnessed the million and one milkshake's creation, which was also dairy-free, but soy-based.

The owner of Millions of Milkshakes in California was on the show to demonstrate "The Miley," a combination of vanilla ice cream, milk, cookie dough and Reese's Peanut Butter Cups, topped with whipped cream and named for its creator, Miley Cyrus. Then, he whipped up another shake with the help of the show's hosts, who referred to it as the million and one shake.

Shake possibilities are endless, especially since this establishment hasn't even tapped into the raw food market. I applaud their efforts to include vegans and the lactose-intolerant crowd (that's why one of the hosts requested soy), but they really should consider some raw options.

Now raw doesn't just have to mean smoothies, as there are so many raw "n'ice cream" and "milk" recipes available. And, since they already provide some raw mix-ins/toppings on their "fruit" and "healthy" sections of their menu (I don't know why graham crackers are listed in that category), why not add a few more? 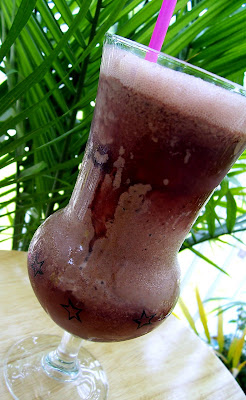 Besides, there are plenty of raw celebs, like Carol Alt and Jason Mraz. Alicia Silverstone has even been known to dabble in raw food.

I can see it now; Woody Harrelson could stop by the place with his zombie friends (my hubby is going to make me see his new flick, "Zombieland") to order up a raw coconut and cashew-based "milkshake" with goji berries and cacao nibs. It's just a thought.

Anyway, now I'm craving a raw shake, too. Thank goodness I can whip something up in my own kitchen (mine has chunks of sea-salted chocolate almonds in it). Wouldn't it be nice if we could get these raw frozen concoctions anywhere?

Even better would be a n'ice cream float. I made them all the time last year, substituting different flavors of kombucha in place of the soda. Averie, that's what you should do with yours.

Speaking of Averie, she may have talked me into participating in Vegan MoFo 2009. I just can't guarantee I'll post everyday, but I will be blogging about something vegan in every October post (so what else is new?). Stay tuned :-)
Posted by shannonmarie at 4:00 PM