OMG, this apple is bigger than my head 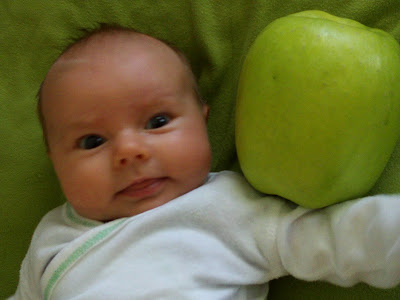 Can you believe my mom found this apple at a roadside stand? She actually picked up a few that were just as big. In fact, they are bigger than Hayden's head (she looks just as surprised in this pic). 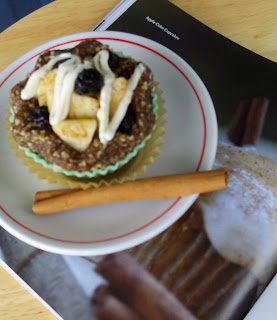 With apples on the brain, I needed to continue the theme with this Apple Tart Cupcake. In proper Vegan Mofo form, I whipped one up using my Gingercakes recipe as the "cake" and a quick and easy pie filling for none other than the cupcake filling/topping. I got the idea from Isa's Gingerbread Apple Pie recipe in her "Vegan With A Vengeance" book.

This is basically a tart, served up in a cupcake shape. But, you have to admit, it is much more irresistible this way. As I've said in the past, I can easily pass on a slice of cake; it's a whole other story when it is presented as a cupcake.

I know I am not the only one with a love affair with this treat, so I amped up the "cake" part, leaving less room for the filling. I apologize to you pie lovers, unless you totally dig the crust. This is another cupcake post, so the "crust" was a must.

If you don't believe me, try it and you'll see; this cupcake/pie combination was truly meant to be. 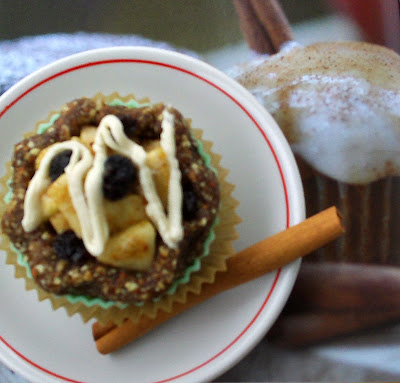 Gingerbread Apple Tart Cupcakes
In a bowl, combine the nut flours, flax, ginger and sea salt. Stir with a whisk or use an electric mixer.

Next, add the date paste and molasses (I like to mix the two together before adding them to the flour). Whisk/mix, paying close attention to the consistency of the batter. Add agave, to taste. Whisk/mix to combine. The batter should be moist enough to hold its shape, but dry enough to still have a crumb-like texture.

Divide the batter in thirds to make a trio of cupcakes. Form them into cupcake shapes, using a muffin tin or reusable cupcake liners, and leaving a well in the center. Make sure to use the excess to form higher edges, which I like to press between my knuckles to mimic that familiar, wavy pie crust edge.

Fill the cupcake wells with quick and easy apple pie filling, and finish them with a piped drizzle of raw icing, although not necessary.

Quick & Easy Apple Pie Filling
Combine all the ingredients in a bowl to suit your tastes. Eat as is, or use in your favorite raw recipe, such as in the above cupcakes.
Posted by shannonmarie at 5:42 AM