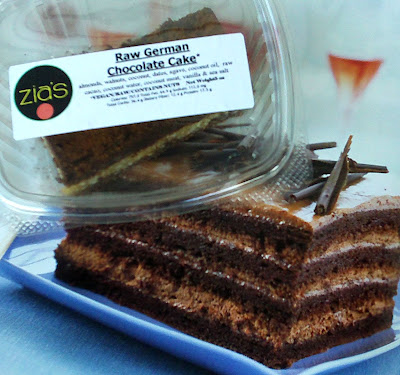 If you've been following my blog for a while, it's no surprise how grateful I am for everything my mom does for me, and today was no exception.

Since Hayden was born, I haven't had a chance to get to Trader Joe's or Whole Foods. After nearly exhausting all my stocked-up staples, I finally made my way back there again. 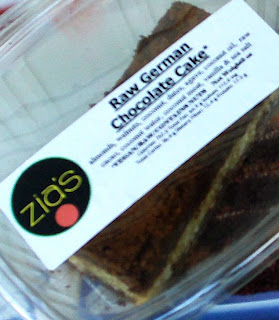 Thanks to my mom, us girls (that includes Hayden; she is the first female grandchild) had a day out, which included lunch at Robeks (I had the Farm Stand Salad and a smoothie) and a shopping trip to both grocery locations. My mom even treated for lunch and toward some of my other purchases, like this treat (the one in the box, not in the background pic).

I rarely post raw creations I did not make myself, but this was one of the exceptions. It's a slice of Zia's raw German chocolate cake I found in the prepared foods section of the updated Whole Foods (it moved to a brand new shopping center, and as a result, expanded its selection). I had mentioned making raw German chocolate cupcakes for my mom in a past post, so it made perfect sense to pick this over the other raw dessert offerings.

I need a Champion 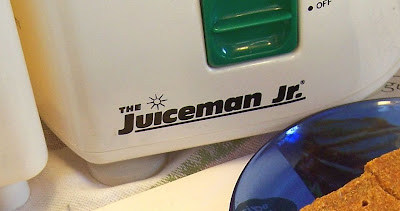 Since I don't juice that often, I never got around to updating my juicer, which is currently a Juiceman Jr. Although it is a pain to clean (which may explain its lack of use), it does get the job done. 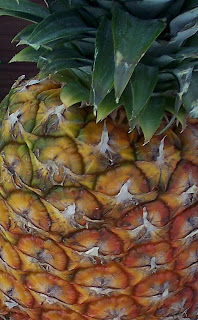 That is, unless I want it to do this.

Once settled in at home after today's excursion, Hayden and I watched "Follow That Food" on the Fine Living channel. They followed a pineapple to a restaurant in Hawaii, where it was transformed into a frozen pineapple n'ice cream with the aid of a Champion Juicer.

Now, I was once impressed with its ability to do the same with bananas, but was content with my food processor method. Do you think my food processor could create the same consistency with a pineapple? Maybe I do need a Champion.
Posted by shannonmarie at 4:53 PM