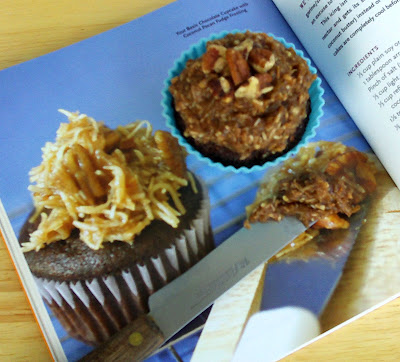 This year, I was unable to whip them up for the big day, but we found a pre-made raw slice on our trip to Whole Foods. It wasn't exactly what I expected (it was denser, the familiar coconut frosting was drier/sandwiched in the middle, and the top was just a dusting of cocoa powder. It wasn't bad; it was just different). However, it was still in the celebratory spirit.

Since I've been busy making raw cupcakes as part of Vegan Mofo, I just had to make another German Chocolate Cupcake, and this time, actually post it on my blog. So, here ya go: 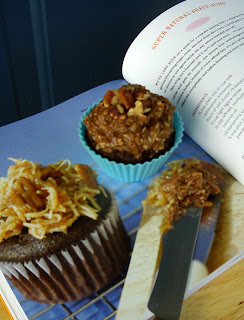 German Chocolate Cupcakes
In a large bowl, combine the nut flour (a mixture of finely ground nuts of your choice combined with leftover nut pulp from making your favorite nut milk; I like using finely ground almonds, mixed with a little hazelnut and Brazil nut pulp), cocoa powder (use the raw cocoa powder if you can get it, which is not the same thing as just grinding up some cacao nibs) and sea salt. Stir with a whisk or use an electric mixer.

Next, add about 1/4 cup of the date paste, 2 Tbsp. of the coconut milk (although any thickened nut milk will do; I bet Brazil nut milk would be lovely in this) and the vanilla. Whisk/mix, paying close attention to the consistency of the batter. Add agave to taste, and more of the date paste and coconut milk as needed. Whisk/mix to combine. The batter should be moist, but not so damp that it requires "baking" in a dehydrator (although you could if you desire).

Divide the batter into sections and form them into cupcake shapes. Frost each cupcake with a generous dollop of the coconut frosting/Samoraw filling. Garnish with chopped pecans. Share them with someone special. 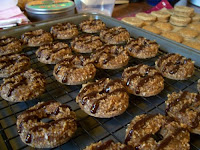 Coconut Frosting,
a.k.a. my Samoraw Filling
Puree dates in a food processor, adding soaking liquid as needed, to create a paste. Add maple syrup, almond butter, vanilla and sea salt, and process until smooth. Add ½ cup coconut, and process to combine. Mix the other ½ cup coconut in by hand. Use to frost German Chocolate Cupcakes or as the filling/topping for your Samoraws.
Posted by shannonmarie at 6:40 AM