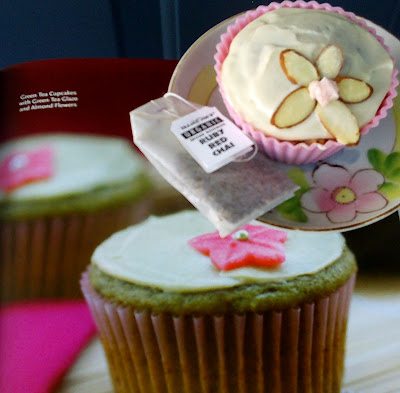 After devouring yesterday's Teecino-tinged cupcake, I just had to whip up another alternative raw offering (this one made the Cupcakes Take The Cake blog, along with the Puppy Cake I'll be featuring soon). This time, instead of making Isa and Terry's Green Tea Cupcake, I opted instead to make a chai version, similar to another one in their book. 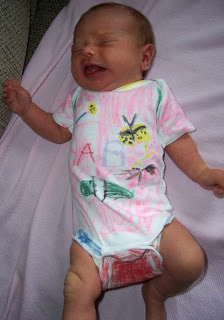 I stopped drinking green tea while pregnant and have been hesitant to go back to it, as a breastfeeding mom. In its place, I sometimes enjoy a warm mug of Rooibos tea, specifically Trader Joe's Ruby Red Chai (I've read that Rooibos tea offers many health benefits, especially for breastfeeding moms and their colicky kids; Hayden doesn't have colic, but she definitely has had her share of fussiness, as seen in this pic).

I made the same swap with this cupcake, and later realized there was a chai cupcake in the book. But, since I was so drawn to the way the green tea one was decorated, I modeled mine similar to it (as well as next to it in the picture), using a different technique and color.

I left the icing its natural color and flavored it with a hint of the tea. Then, I made a flower out of some sliced almonds and a dollop of some leftover pink icing (I had some in the freezer from making this raw cupcake; you could always use a piece of dried fruit instead, like a cranberry, cherry, raisin, etc.).

This cupcake is a nice compliment to my tea break, no matter how short it may be. 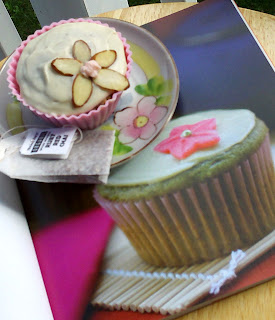 Ruby Red Chai Cupcake
*Makes one cupcake for those times you just want what everyone else is having. Feel free to make a larger batch if needed.
In a small bowl, combine the cashew and almond flours (I ground up 1/2 cup of each when I made these cookies. Then, I divided the "flour" in half and saved half for later use; it makes life easier if you plan on making more creations), pie spice (it contains cinnamon, ginger, lemon peel, nutmeg, cloves and cardamom; everything a busy mom needs to create a chai-like taste), black pepper and sea salt. Stir with a whisk or use an electric mixer.

Next, add the date paste and a touch of vanilla. Whisk/mix to combine. The batter should be moist, but not so damp that it requires "baking" in a dehydrator (although you could if you desire). Form it into a cupcake shape.

Frost the top of the cupcake with a tablespoon or two of the icing mixed with the brewed tea. Decorate it the top to look like a flower. Enjoy with a cup of tea :-)

This recipe was brought to you as a part of Vegan Mofo.

Posted by shannonmarie at 6:22 AM