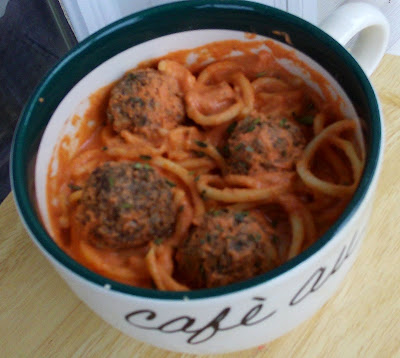 No, not a break where you eat cupcakes, but actually a break from cupcakes (posts that is. But don't worry; I'll be blogging about the rest of the recipes soon). That's why you don't see one in this post (although the recipe is served in a cup, or in this case, a bowl-sized mug). 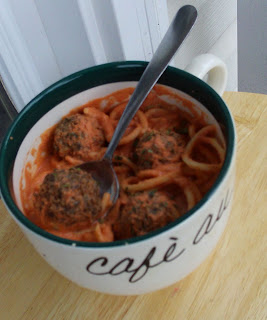 In an effort to change things up a bit, here's what I had for dinner the other night now that it's getting colder. It is a rawified version of Rachael Ray's Spaghetti and Meatball Stoup, minus the meat, of course. I used to make the cooked version with mock meatballs and rice spaghetti noodles, so I took it a step further by making it raw with nutmeat and zucchetti (my term for zucchini spiralized into "spaghetti" - hey Averie, I finally picked up some zucchini again).

It is so simple. Just make the nutmeat-balls below (or your own go-to version) and add them to a big mug of raw tomato soup (pureed sun-dried and fresh tomatoes, soaked cashews, olive oil, agave, sea salt and Italian seasonings) and zucchetti (it looks more authentic if you peel it first). As Rachael would say, "Yum-O!"

Nutmeat-balls
*These are meant to be enjoyed in a raw sauce of some sort to truly mimic a classic meatball.
Combine all the ingredients in a food processor (I rarely measure seasonings, so add the amount you like), and process them into a ground "meat" consistency. Give the mixture a taste test, and adjust the seasonings as you wish.

Mold the mixture into nutmeat-ball shapes (it should make 8-10 balls), and "bake" in your dehydrator until firm to the touch, yet still moist inside. Use finished nutmeat-balls in your favorite raw spaghetti dish, such as Zucchetti and Nutmeat-ball Stoup.

This recipe was brought to you in celebration of Vegan Mofo III.

Check out this raw stoup mug 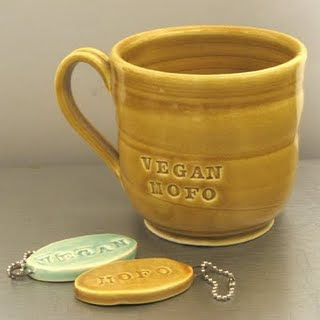 Speaking of mugs, I just love this little number over at Vessels and Wares (I'm also fond of these cupcakes and cake stands on the site). Jeanette has been nice enough to give it away to some lucky vegan as part of Vegan Mofo. Now that's the perfect vessel for serving up some Zucchetti and Nutmeat-ball Stoup.
Posted by shannonmarie at 7:01 AM