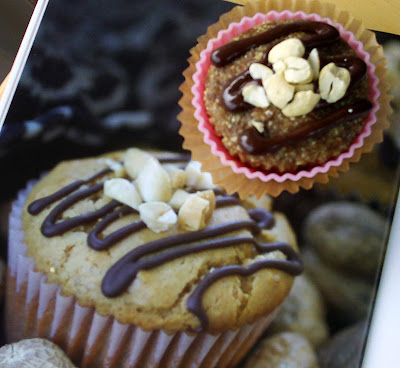 After making my Quick and Easy Tastes Like PB Cookies, I thought about putting some of the yummy dough into a cupcake, but unfortunately, I had already eaten them all. Instead, I started from scratch with a rawified recipe of Isa and Terry's (just because your raw doesn't mean you can't pick up a copy of their book; you can rawify their cupcakes to your hearts desire), using a modification of my usual raw cupcake recipe.

To my surprise, their recipe contained apple cider vinegar, just like my cookies, as well as molasses, something my cookies lacked. Now I won't be changing up my cookie recipe anytime soon, but I was willing to try a little of this ingredient in today's cupcake.

And, as part of Vegan Mofo, you can, too. Use the recipe below, or fill your cuppies with the other day's cookie recipe (which tastes more like peanut butter than these cupcakes). 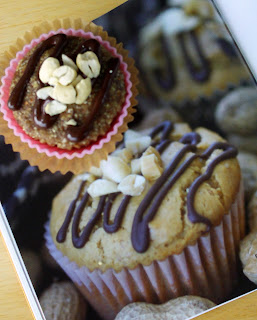 Tastes Like
PB Cupcake
*Makes one cupcake for those times you just want what everyone else is having. Feel free to make a larger batch if needed.
In a small bowl, combine the cashew and almond flours, flaxmeal and sea salt. Stir with a whisk or use an electric mixer.

Next, add the date paste, molasses and vinegar. Whisk/mix to combine. The batter should be moist, but not so damp that it requires "baking" in a dehydrator (although you could if you desire). Form it into a cupcake shape.

Drizzle the top of the cupcake with a combination of cocoa powder mixed with agave. Garnish with some chopped cashews. As always, enjoy!

*You can amp up the PB flavor by frosting them with my Rawgalong filling, which also tastes great on top of raw chocolate cupcakes. If you missed it in the past, here is the recipe: 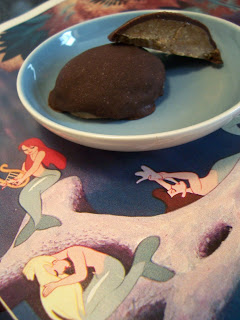 Better Than
Peanut Butter
Combine all the ingredients in a bowl. Enjoy as is, or as a replacement for peanut butter in your favorite PB recipe. It's a great frosting for raw cupcakes, or mixed into this raw whipped cream for a lighter (in color and texture) topping.
Posted by shannonmarie at 6:14 AM