To finish off this cupcake craze (at least this grouping of Vegan Mofo ones), I decided to tone it down a bit and reduce some of the fat.

Now, why would I want to do that?

Well, after eating so many other raw cupcakes, I thought it only natural to cut back a little, even if it is just to satisfy my own conscience. Besides, this is a rawified Sexy Low-fat Vanilla Cupcake from "Vegan Cupcakes Take Over The World." It will have you looking and feeling sexy in no time (no guarantees, but they work for me).

Now, my cupcake isn't exactly low-fat, like the ones from the book, but it is a reduced fat version of my basic raw cupcakes. I just cut the fat by replacing half of the nut "flour" with oats. And, for those of you who can't have nuts at all, feel free to replace the rest of the nuts with golden flax or hemp.

I also lowered the fat content by topping them with berries and just a simple sweet coconut drizzle. It's like making your traditional milk and confectioner's sugar icing by reversing the flavorings (the sweetener is now the liquid, while the coconut becomes the thickener). It's so easy; you've got to try it.

Rawified & Sexy Lower-Fat Cupcake
*I apologize for the lack of modesty, as my cupcake is naked in this pic. I just didn't want to hide what was beneath those juicy berries and simple sweet drizzle.

In a high-powered blender, grind the oats and cashews into a "flour" (grinding them together actually helps separate the cashew pieces, preventing them from turning into a nut butter). Add to a small bowl with the sea salt.

Next, add the date paste, agave (I added about 1/2 Tbsp.) and a touch of vanilla. Whisk or mix with an electric mixer to combine. The batter should be moist, but not so damp that it requires "baking" in a dehydrator (although you could if you desire).

Form the batter into a cupcake shape, and spread on a layer of raspberry "jam." Then, garnish the top with some fresh raspberries and the simple sweet drizzle. 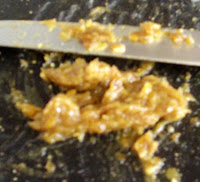 One more thing that may deter someone from making just one cupcake is the date paste, which usually needs to be made in a large enough quantity to help it along in the food processor. I, unfortunately, was out of date paste when I made this cupcake, so I used this technique in a pinch.

Wanna know what I did?

Well, I used the same technique for making garlic paste on a cutting board with a sharp knife. You just finely chop the soaked dates in a rocking motion, and then, use the side of the blade to crush and scrape the dates into a paste. Alternate between the two motions until you reach your desired consistency. It takes a little work, but it's worth it.

Look what came in the mail: 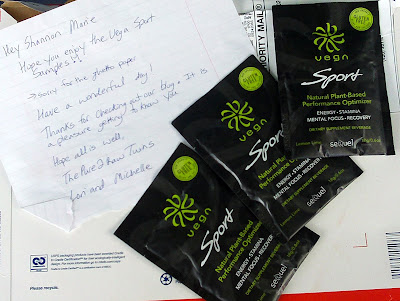 I just wanted to say thank you to Lori and Michelle (I still get a kick out of their names, since I have a sister named, "Lori Michelle"), a.k.a. Pure 2 Raw Twins for sending me these convenient Vega samples. They just came in the mail yesterday. Thanks :-)

And for those of you unfamiliar with their blog, you should check them out. They have the perfect combination of both raw and baked, as they have made a business out of their cupcakes (you know how I love cupcakes). Wish them luck as they are also training for a marathon. You go girls!
Posted by shannonmarie at 6:54 AM