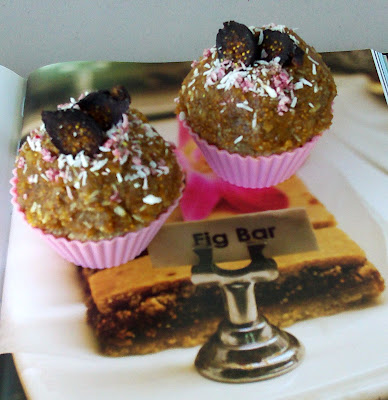 That's what my son has ben singing around the house lately, so it's no surprise that I opted to use it as the title today. He's become quite cultured, even asking my mom if he could paint like Jackson Pollock. It was his sly way of talking her into making a mess with the paint. She was so impressed that she let him do it. 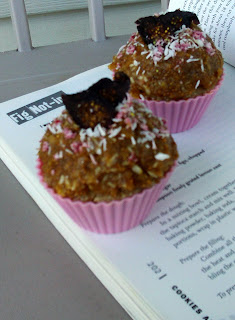 But back to the "fig" part of the theme; after posting all those cookies yesterday, I got a craving for some rawified Fig Newman's (I always preferred theirs to the original Fig Newtons, especially since they make a wheat- and dairy-free version), but I decided to mix it up a bit. I thought, "why not put my own personal spin on it by making it in cupcake form?"

As you can see in the background photo, Sarma already published her raw take on the nostalgic cookie (it's in her new cookbook, but you can pick one up to go at Pure Food and Wine's Takeaway), while Isa can take the credit for veganizing the bake good in her "Vegan With A Vengeance" book. Now, I have taken that cookie one step further by transforming it into a raw vegan cupcake.

Inspired by Isa's Fig Not-Ins name (I guess it is due to what 's not in the cookie, although it does still contain figs), I decide to call mine Fig In-and-Out Cupcakes, since they have figgy goodness packed inside and smothered over the top. Delish! You're gotta try this stuff, and since it is Vegan Mofo, you can. I posted the recipe below. 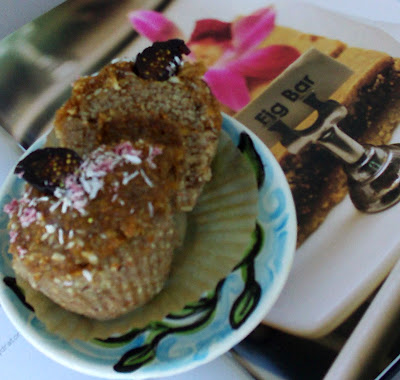 In a small bowl, combine the nut flours and sea salt. Stir with a whisk or use an electric mixer.

Next, add the date paste and a touch of vanilla. Whisk/mix to combine. The batter should be moist, but not so damp that it requires "baking" in a dehydrator (although you could if you desire).

Divide the batter in half to make two cupcakes. Pinch a small section off each half to use as the tops. Form the rest into two cupcake shapes with a well left open in the center. Fill the wells with fig paste, add the tops and seal off the edges to conceal the fig paste inside.

Frost the tops of the cupcakes with more fig paste (I mixed some coconut flakes in mine for added texture), sprinkle with coconut flakes (I tinted some of mine with berry juice) and garnish with a small dried fig cut in half (I used Turkish figs for the fig paste and mission figs for the garnish to provide a nice color contrast).

*To make fig paste or date paste, soak about a cup of figs or dates in water until soft. Add to a food processor along with some of the soaking liquid. Puree into a paste, adding more soaking water, as needed. Use to make this recipe or one of my other raw cupcakes.
Posted by shannonmarie at 6:45 AM