Almost too cute to eat 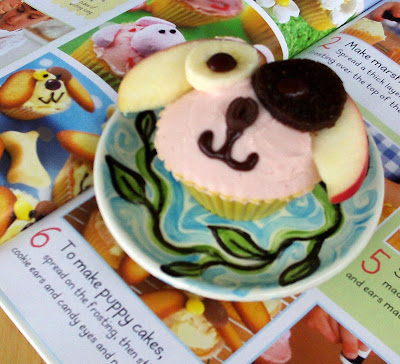 Notice I typed "almost," as I did end up eating this tasty morsel. I wouldn't normally consume an animal, but this one was entirely raw vegan, so I guess it was okay. 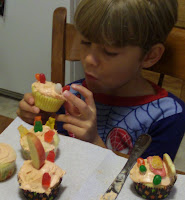 I don't know why I buy kid's cookbooks for my son, when he rarely has any interest in the recipes inside. I could just as easily entertain him in the kitchen, making things he already enjoys, but in a more exciting way.

Amazingly, this particular cookbook actually ended up inspiring both of us. While he decorated his baked version of the cupcakes, I dolled up a raw one, similar to the book's "puppy cake." I just replaced the cooked toppings for raw ingredients I had in my kitchen.

Let's see; instead of using store-bought cookies for the droopy ears, I perked the little puppy up a bit with these apple wedge versions. I also stuck with the fruit theme by using a banana slice as one of the rings around his eye, as opposed to the suggested piece of candy. 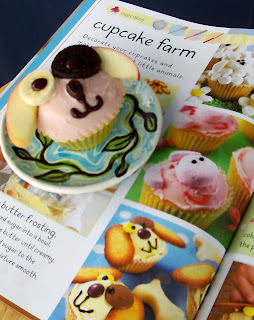 I did use a cookie for the other eye circle, but this was a raw one I had stocked up in my freezer (I like to put the extras from my "unbaking" in there for when a craving strikes). This particular one was a raw gingerbread circle, similar to a ginger snap (they are more likely to "snap" right after you remove them from the freezer). I make them in a variety of shapes and sizes for snacking, decorating raw cupcakes like these or constructing raw ginger bread houses, such as this one.

The pink icing was also leftover in my freezer from icing this cupcake, while the chocolate nose was piped from the frosting swirled on yesterday's model. But, I whipped up a quick combination of cocoa powder and agave nectar to draw on the mouth and the inside of the eyes.

Underneath all that decoration is just a basic spiced cupcake, but just in case you need the recipe, here it is again in celebration of Vegan Mofo. 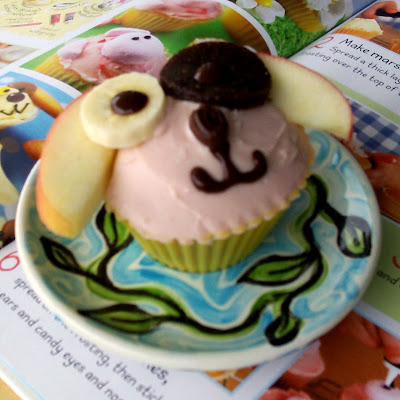 Basic Spiced Cupcake
*Makes one cupcake for those times you just want what everyone else is having. Feel free to make a larger batch if needed.
In a small bowl, combine the cashew and almond flours, pie spice (it contains cinnamon, ginger, lemon peel, nutmeg, cloves and cardamom) and sea salt. Stir with a whisk or use an electric mixer.

Next, add the date paste and a touch of vanilla. Whisk/mix to combine. The batter should be moist, but not so damp that it requires "baking" in a dehydrator (although you could if you desire). Form it into a cupcake shape.

Frost the top of the cupcake with the raw whipped icing and decorate as desired. Have fun :-) 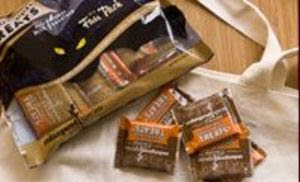 If you still want to make the baked version (try one of the cupcakes from "Vegan Cupcakes Take Over the World"), here's a list of cookie and candy options, courtesy of The Innocent Primate Vegan Blog. They may not be healthy selections (this is just for fun, so be nice with the comments; nobody's perfect all the time), but at least they're vegan.
Personally, if I fall off the raw wagon for a sweet candy treat, I like Endangered Species Chocolate. It's organic, fair trade, vegan yumminess :-)
Posted by shannonmarie at 6:03 AM