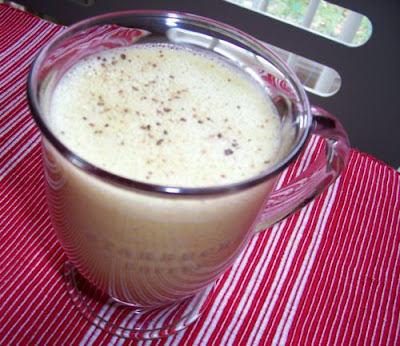 Well, my pumpkin chocolate chip cookies didn't turn out the way I envisioned them, but I'll share my experiment with you anyway. 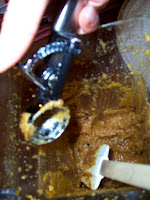 When I left you last, I headed for the kitchen to recreate the pumpkin chocolate chip cookies that led me astray from the raw track last year. I needed to bake some for my son's class at the time, and since they were easy to make as a vegan version, I didn't hesitate to try one or two ... maybe a few. Oops, at least I didn't end up totally cooked (but my raw percentage dropped a little into the holiday season).

I resisted the temptation to make any baked recipes with my pumpkin this time, and set off to make a raw version of these tasty treats. 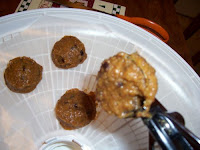 I originally decided to use the Butternut Squash Cookies (substituting pumpkin in place of the butternut squash) recipe from the "Eating Without Heating" book as a base, since it didn't any use nuts or seeds. However, I changed my mind once I actually started making them.

I opted to use my blender instead of the food processor to obtain a creamier consistency, but found myself adding some flax and almond meal to bulk the batter up a bit. I also switched the honey to agave and put in a little vanilla for that home-baked flavor. 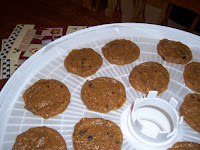 Lastly, I mixed in some raw cacao nibs, used a mini ice cream scoop to drop the batter onto parchment-lined dehydrator trays (I have two old-school round dehydrators, but I really need an Excalibur), flattened the scooped batter into round cookie shapes and dehydrated them (flipping once and removing the parchment).

The "baked" cookies reminded me of the original version's flavor with a texture like a cross between a piece of fruit leather and a Chewy Chips Ahoy Cookie (as if that is even possible). I savored every yummy morsel.

But what about the disastrous conclusion I alluded to? It was a much happier ending from a flavor perspective; the downfall came in a visual form. I know you shouldn't judge a book by its cover, but as I have said many times (on this blog a couple times already, too), you eat with your eyes first.

Once dehydrated, the cookies became darker with less definition between the chips and the cookie itself. To maintain their traditional pumpkin color, I'll probably use golden flax and golden raisins in my next batch.

In the meantime, I'll just enjoy them with some more pumpkin nog (pictured at the top of this post), while I reflect on what I've learned from this experience.
Posted by shannonmarie at 4:56 PM

So good to see that you dehydrate things without an excalibur. I hav ea really old school cheap one that my Mom bought off television 6 years ago and never used! But it is a start and I'm hoping to upgrade sometime too. Do you have much luck with yours? I have only tried a few things so far, but will have to try these cookies!

By the way, I tried your Cherry Garcia Ice Cream from Gone Raw last night, it was fabulous and so easy!! I am really loving your blog, you are doing a great job! Thanks for the great recipes and great links. I have discovered so many wonderful blogs through you. Keep up the good work!

I guess I've gotten used to making recipes in my old school cheap model. That's probably why I haven't invested in a more expensive one. Like Tim Gunn from "Project Runway" (love the show) says, I just "make it work."

I use parchment since I don't have teflex sheets, pizza crusts have a hole in the middle and I have limitations on how thick I can make things. If you need any other pointers, don't hesitate to ask.

But, I don't dehydrate as much as I used to. I actually prefer non-dehydrated dishes, like the cake in my newest post.

Thanks for the compliments. They really encourage me to keep this blog afloat :-)

Parchment is a good idea! I haven't used mine too much either, it takes so long and I'm not sure if it is really doing what it is supposed to.

With this new found dehydrading inspiration, I'm off to try Karen Knowler's gingerbread man cookie recipe...keep your fingers crossed for me!

My fingers are crossed for you.

It's funny that you're trying your hand at raw gingerbread, since I planned on making it this weekend, too. My family is building gingerbread houses on Sunday, and I'd hoped to find a raw way to participate.

So the gingerbread came out pretty well. I used almond flour instead of pecans (because that's what I had on hand) but I think pecans would give it a richer flavor. Also I think I would try something more next time to make it a little sweeter and more "gingery" maybe maple syrup and fresh ginger?

Anyway, I need that recipe for your icing from the cinnamon rolls now so I can decorate :)

Congrats on the gingerbread. You can try icing them with the whipped cream from the Sunny Raw Kitchen blog, which is what I use on my cinnamon rolls (when I have time, otherwise I mixed raw almond butter with agave, sea salt and vanilla). There's more info about it in my latest post.