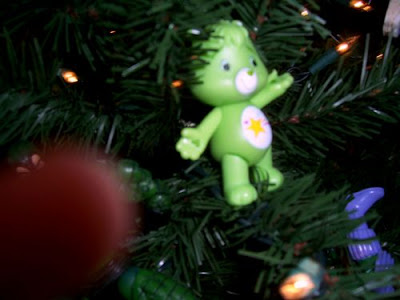 I'm going to make this brief, since my poor baby is sick. Well, I guess he is not actually a baby anymore; he'll be turning 5 years old in just a matter of weeks. Time just goes by so fast.

My little man fell ill yesterday with a fever as high as 102.5 degrees (and I'm not sure he had the thermometer completely under his tongue when I took it), a lack of energy and a decreased appetite. At least he kept asking for fluids throughout the day, as well as multiple times during the night (no one slept well in our house last night).

This morning, he is much cooler and woke up asking for the first piece of chocolate from his advent calendar (a calendar which counts the days leading up to Christmas, with a tasty treat inside a little door representing each day; he has been counting the days until Dec. 1, when he could open the first door). He must be feeling better; he is eating his breakfast right now. But, just in case he relapses, I'll still make this a short post.

I made sure to start my day off with yet another gigantic green smoothie. This one definitely included a ton of greens (not literally; I chose kale this morning), oranges for some extra vitamin C, banana for potassium, and peaches (I still have some in my freezer I saved from the local produce stand this summer) and rosemary, two additions inspired by one of Kristen's posts. Don't knock it until you try it.

According to my "Massage, Aromatherapy & Yoga" book, "during the plague, (rosemary) was burned in public places and worn around the neck for its antiseptic qualities."

So, of course, I felt like it couldn't hurt to add it to my smoothie this morning as a dose of added protection from the germs in my own home.

On a cautionary note, "use in low concentration, as excessive does may bring about epileptic fits or convulsions. Do not use in early pregnancy or if you have high blood pressure."

Don't be concerned about me; I only added a little, and my blood pressure is actually low (despite all my worrying last night).

But now, I need to tend to my son. Check out his photo skills. He has been taking pics of our Christmas tree, which he has been decorating himself. He has even added some of his own toys, including action figures and this cute Oopsy Care Bear (so sweet).
Posted by shannonmarie at 6:27 AM

i've been hearing a lot about peach green smoothies lately. you and kristen. then i get an email from raw food right now with a recipe. and last night on raw summit that's what ani phyo was talking about too.

It sounds like everyone is on the same wavelength. I notice that happens a lot, like when I peruse the other raw blogs and find trends among their posts. Sometimes I'll post something, and discover that someone else had already beat me to it.