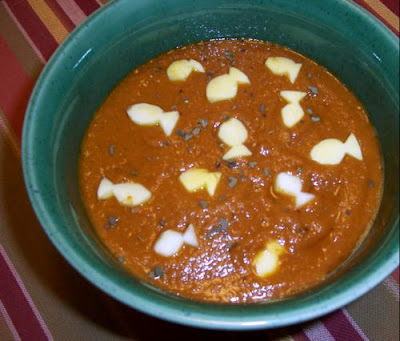 I thought I was going to go crazy without my precious miso, but Rawbin came to my rescue this week with a new container.

Miso has been my not-so-secret ingredient in my raw soups that really makes them taste like soup (maybe it's all the salt or the fact that miso is a type of soup). I've been experimenting with so many new soup combinations lately, (due to the cold weather/season) that I was scraping the bottom of the one I had in the fridge.

Now that I have more on-hand, I'll be cranking out a lot more recipes with this ingredient, like my pumato goldfish pasta soup, inspired (I hate to say it) by the Campbell's tomato version (but I bet mine tastes better and is definitely better for you). Basically, it was my way of finishing off the end of the pumpkin I posted about earlier in the week.

I blended up the end of the pumpkin with some soaked sun-dried tomatoes, hence the "pumato" name, and their soaking liquid. I also added some olive oil, garlic, agave, basil (goes hand in hand with tomatoes), oregano, sage (a perfect pairing for pumpkin), cayenne pepper (for heat), freshly ground black pepper, and of course, some miso.

Lastly, I cut up some yellow squash to look like the goldfish noodles (kind of like Vegannosaurus Rex's zucchini elbows in his Rawcaroni Salad) or crackers. They give a little texture to this creamy concoction.

Adding pumpkin to this soup reminds me of how I used to put pumpkin in my pizza and spaghetti sauces for a nutritional boast. No one ever noticed it was there. I also used to add carrot juice to my pizza dough, which, although not hidden, freshened the flavor and lent a beautiful color to the usual drab crust.

Now I'm starting to sound like Jessica Seinfeld (Jerry's wife), who recently put out a book called "Deceptively Delicious," where she makes typical family meals and desserts with the added benefit of a concealed veggie puree. Her recipes may be cooked, but the concept still translates well into the raw world. I'll probably experiment with "rawifying" some of hers in the future. 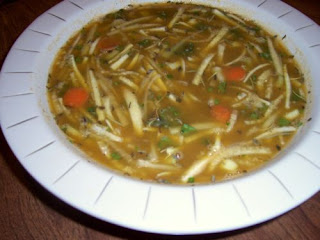 Back to what I've already made this week with my miso, I also had some no-chicken soup, which I mentioned to Rawbin when she handed me a new tub of the stuff. I gave her a quick explanation of how to whip one up in a hurry.

You just cut some zucchini or use a spiral slicer (I still need to get one of those) to create noodles, thinly slice some carrots and celery, add them all to a bowl with some chopped parsley and other herbs, and pour some raw broth (warm water, carrots, celery, onion, garlic, olive oil, miso, cayenne pepper and poultry seasonings blended in high-powered blender) over the top. It's wonderful for this time of year.

Another favorite quick recipe of mine that uses miso is the Sun-Dried Tomato and Cashew Romesco recipe from "Raw Food Real World" (www.oneluckyduck.com is selling signed copies on its website at the moment). When I'm in a hurry, I just use it as a dip with cut up veggies, but I also like to put it in raw lasagna; it tastes a little like the cheesy/tomato filling. Yummy!

I'm so glad to have miso back in my kitchen. Thanks again, Rawbin :-) 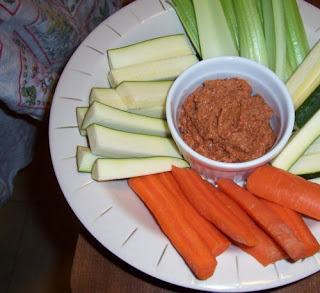 Posted by shannonmarie at 5:02 PM

i'm half-japanese. so miso is definitely a staple around here too.

those goldfish look great. i actually thought you had cheated at first :)

Glad your cranking out the soups again. I have the fire going in one room and the dehydrator going in another, so it's pretty toasty here. Those goldfish "crackers" look fun. I'm wondering if you cut them individually or did you have a cookie cutter?

I would never cheat, ha ha. At least I can honestly say I didn't this time (it's very rare when I do). I cut all those little fish out by hand with a paring knife.