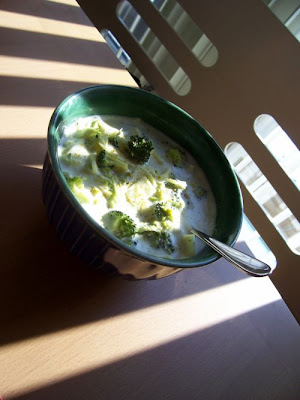 Here it is, what you've all been waiting for: my cream of broccoli soup.

My mom used to make it for me growing up, and while "rawifying" my favorite childhood food memories, this non-raw, but still vegan, soup recipe showed up in my inbox (what a coinkydink; the world works in mysterious ways).

The easiest recipes to "rawify" are those that start off with raw ingredients; you just skip the cooking part. So, I lucked out when I checked this recipe's list, which included the following:

Ingredients for C.O.K.'s
(Compassion Over Killing)
Cheesy Broccoli Soup
My first thought was, "wow, they used cashews instead of some pureed tofu base." Then I thought, "so why not just make it raw?"

Now, I had made raw cream of broccoli soup in the past, but it didn't exactly resemble C.O.K.'s picture of its final product nor my mom's version. It tasted good, but it had a different texture.

You see, I used to just add a bunch of ingredients to my food processor, and process them until creamy, yet still a little chunky (if you can envision it). The whole soup was green and lacked definition between the usual cream-colored base and green broccoli.

This time, I decided to start with the base, and then add the broccoli and the noodles (I'll get to that in a minute). The result looks a lot more like the real deal (I know I've said it before, but I am a firm believer in the fact that we eat with our eyes first).

I made a few adjustments (like making a smaller amount to feed one or two people; hey, it's just me), so here's my version:

Rawdorably Raw Cream of Broccoli Soup
I know it is the last ingredient on the list, but the first thing I did was toss the broccoli in some lemon juice, EVOO, sea salt and pepper. Then, I put it in the dehydrator until it softened a bit and resembled a "cooked" texture, since I would be skipping the actual cooking part.

Next, I sliced the zucchini into thin noodle-like strips, reserving a handful of chunks to add to the base to lighten it up a bit. The decision to add the noodles was based on my mom's recipe, which included egg noodles.

For the base, I added all the other ingredients (everything except the broccoli and zucchini strips, but don't forget the handful of reserved zucchini chunks) to my blender and ran it until completely smooth. Then, I added a couple chunks of the "cooked" broccoli and hit the "pulse" button a couple of times to incorporate it, but not change the color of the soup base (I just wanted to create another texture).

I divided the broccoli and zucchini noodles up between two bowls, and poured the soup base over top. In the future, I plan on scrapping the foam off the top first, which explains the bubbles in the pic, but hey, I was hungry.

All that was left to do was stir and eat. I topped one bowl off with some nutritional yeast/sesame seed topping (it's a little like Parmesan cheese sprinkles; I add my favorite Italian seasonings to it and keep it in a shaker in the refrigerator) from "The Thrive Diet Book," and put the rest away in the fridge for last night's dinner (even better the next go-round). I'm definitely having this one again.

So, there's your first lesson in "rawifying," for those of you who asked. Let me know how your raw versions of cooked favorites turn out.
Posted by shannonmarie at 4:09 AM

I made this tonight and it was delicious! Thank you for sharing this recipe. Yummy.

No problemo. Thanks for the compliment :-)

I don't know about you, but I really like experimenting with chunkier/heartier raw soups. Don't get me wrong; I really enjoy the purees, too, but sometimes I need something a little more filling.

Soups have always been a staple of my winter nourishment. Now that I am raw, I am always on the look out for good raw soup recipes. I substituted the zucchini with tomato chunks in my version. Looking forward to trying a version with asparagus one day and maybe even leek?

Substituting with tomato sounds very tasty. I just love it when people put their own personal spin on things.

Okay, so I made your broccoli recipe for "breakfast" after my green smoothie. I had enough to satisfy my craving and stashed the rest for lunch later! Yummy, but my D.H. tried it and said, "eeewwww". That's okay, It wasn't really for him, but I would have shared if he'd liked it.
I think I'd like to try it with asparagus and tomatoes. This sounds like a good winter meal, doesn't it?

Hi Shannonmarie!
I've been a silent fan of your blog for a while now, and I hope you don't mind me posting a link to you (and this recipe) via my own site. It should be up shortly. Thanks so much for your awesome recipes. :)

The Truth About Nutrition said...

i have made this about 3-4 times now (only without hthe cashews bc my husband is allergic) and he says every time: THIS IS MY FAVOURITE SOUP EVER!! I love this recipe, just genius. Thank you so much!

So glad you like the recipe. I'll have to try it without the cashews. Thanks.