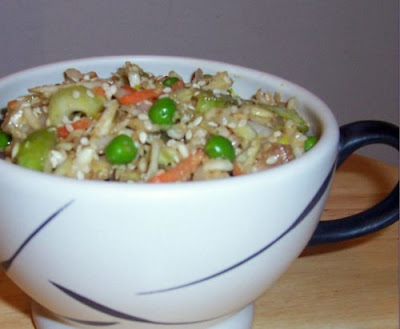 Yesterday I wrote about "rawifying" (I'm making up my own words now) your favorite cooked recipes, which gave me the idea to make a raw version of one of my favorite childhood snacks: egg rolls (I bet you would never have guessed that one, unless you're my mom).

If I remember correctly, my mom had taken a Chinese cooking class when I was little. She was so excited to share her new recipes with us, like 1-2-3 chicken (she still makes this one for my sisters or parties, but I never was a fan), some kind of barbeque noodles, sweet and sour pork, and some other dishes I can't recall at this time. The egg roll recipe may have been one of my aunt Judy's (she always has the best recipes), but it quickly became a popular appetizer to start off this meal.

Eventually, the egg rolls turned into the main event. We would make a ton of them, which involved an assembly line operated by all the girls in my family (my mom, myself and two sisters). We would mix up the filling, roll it into wrappers, fry them in a scorching hot pan and serve them up with a variety of dipping sauces.

Oh how I miss those egg rolls, especially the filling. When I would get tired of rolling and frying (or just get too impatient), I would just set down with a bowl of filling (the best part).

Last night, I did my best to recreate this experience. I put some shredded cabbage in a bowl with some mung bean sprouts, carrot, celery, peas, cubed portobella mushrooms (to replace the chicken chunks), sesame seeds, rice vinegar, Bragg's Liquid Aminos (instead of soy sauce), agave, sesame oil, sea salt, garlic, poultry seasoning (to fake out the chicken part), Old Bay seasoning (the secret ingredient in my mom's recipe) and some ground golden flax (to absorb some of the liquid and replace the corn starch from the original recipe).

I think that was everything, but you know me; I started tossing things in a bowl and easily lost track of what I am doing. I need to start writing things down. Hopefully this blog with help me with that. 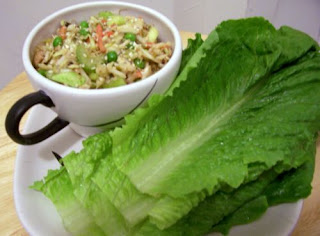 Anyway, the result was very similar to what I remember, especially since I did not have a recipe for reference. All that was missing was the wrapper, which I quickly substituted with some romaine leaves. This saved on the frying time, which was never good for my insides, as well as my outsides (I have been burned by the hot oil on occasion; ouch!).

I hadn't planned in advance for a dipping sauce, so I just used some organic Dijon mustard (I know, not raw; organic apple cider vinegar, water, organic mustard seed, salt and spices) mixed with agave for sweetness. It actually really hit the spot.

Now, it is dinner time, and lucky me, I have leftovers. I was thinking about them the whole way home in the snow (first of the season, unless you count the 15 minute flurry yesterday). I'd take a pic, but it's turning to slush.
Posted by shannonmarie at 2:20 PM

To all of Rawdorable's fans: I'm SO LUCKY!!! I get to pick this chick's brain twice a week up close and in person! It's like working side-by-side with a young and vivacious martha stewart. She's been describing these marvelous creations for years, now. But the pictures are just so incr-"edibly" enticing... who wouldn't want to be raw? I can't wait to go out and get some of these ingredients to try her latest. Too bad I'm not as adventurous. I need it all measured and spelled out for me. I'd certainly buy into her "Rawifying" ebooks when they come out!

I am so blushing. I guess I really need to consider this whole e-book thing :-)