If you build it, they will come 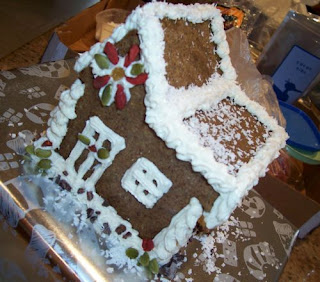 I can't believe I've only had this blog for a month and a half, and already have been featured on We Like It Raw's main page, as well as twice on its Quickies. I've even more than doubled the number of votes on my current poll in just a matter of days.

Obviously, all this attention is due to my gingerbread structure and Dhru's influence in the raw community; I couldn't have garnered all this publicity without him. Thanks again.

When I was constructing my "house of raw," I found that it wasn't going to be easy to get everything to hold together, much less stay together.

But, I didn't let that stop my progress. I had already posted my plans, and there was no way I was going to let myself fail. Even if I only had a small audience, I was not about to admit my defeat. And, if I succeeded, I would be a rock star, at least in my mind.

I do feel like a rock star, because of all the traffic I have received on my blog in the past few days and all your kind comments. So, thanks to all of you, too.

The holiday season is the perfect time to show one's gratitude and spread the love around. That's why I like to highlight my fellow raw food bloggers, as well, like Raw Food Grrl, who has the most artistic mascot (I think she has them on t-shirts, too).

In today's post, she directs attention to this raw vegetable Christmas tree ... did you click on it? See, another example of "if you build it, they will come" (sounds like "Field of Dreams." I never was a Kevin Costner fan, but it makes a good reference). It wasn't my initial intention, but somehow it works.

*On another note, I just wanted to wish Courtney good luck breaking her juice feast. She is an inspiration to us all.
Posted by shannonmarie at 4:37 PM

hi shannonmarie!
would you consider doing a blog entry about natural beauty products? thanks, stacy

Of course, I've actually been considering doing one for a while; I've just been so wrapped up in holiday and birthday stuff lately. I should be able to address this topic soon.