A toast to our day of fun 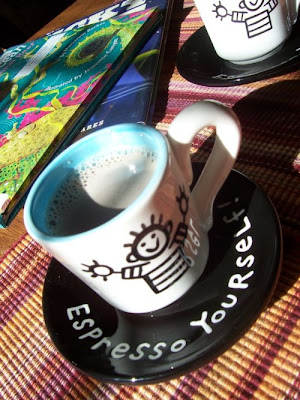 Well, yesterday, my son and I had a snow day, and today, I am waking up to the evidence. But, that's okay; the fun we had was well worth the cleanup.

We started out slow, watching "Tom and Jerry," and "Scooby Doo" (sounds like my childhood) in our pajamas. Then, we had some warm cocoa together in his favorite espresso mugs.

He's so cute; he picked these cups and saucers out at a coffee, tea and gift shop near our home. When he saw them, he had to have them, insisting that we take them home for a tea party.

At first, I figured it was just an impulse, so I told him if he didn't find something else he might want at one of the other shops, we would go back and get them. As you can see, we ended up revisiting the store and making a purchase.

For days, we would have tea parties and drink water from these little gems, but its been a long time since our last sip from them. So, my little man was ecstatic when I pulled them at of the cabinet. 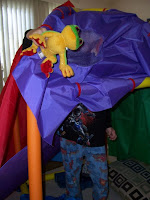 We had a toast in our little mugs, and I read to him some of his library books as we drank. "Over in the Ocean in a Coral Reef" by Marianne Berkes (winner of the 2006 Teacher's Choice Award) was his favorite of the two (he didn't care too much for "Lucky Jake;" I think it was because he was confused that the boy named the pig, "Dog"). He liked looking for all the baby sea creatures on one of the pages, and I enjoyed the familiar tune it followed (there was music for the text at the end of the book).

We had a lot of fun playing with his toys, as usual, but since it was a snow day, we also built a fort. I remember constructing them out of furniture and blankets as a kid; nowadays, Cranium sells a kit, which lets children use their imaginations to make a variety of forts, ships, etc.

My son built a home for his Webkin, a stuffed tree frog he got as a favor from a party with that theme. His frog also has an identity online in the Webkinz world, which we never got around to visiting yesterday. Poor tree frog; I hope he's okay (you need to put him to sleep, give him some exercise and feed him). 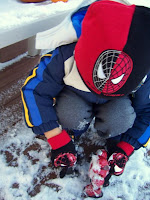 For lunch, I made the raw cream of broccoli soup I teased about in my last post. Unfortunately, due to time constraints (I have to get ready for work), you'll have to wait until my next post to get the details. My son had no interest in it, but I thought it turned out much better than expected. I'm anxious to share it with you.

After lunch, we bundled up to play in the snow, of course. It wasn't the best for shaping snowballs or snow people, but we found ways to occupy ourselves outside anyway. My son even brought some of his toys into the white stuff. Check him out; he looks like Spiderman, which according to him, is "awesome!"

When we came inside, it was time for another toast. Here's to staying warm this season. Cheers! 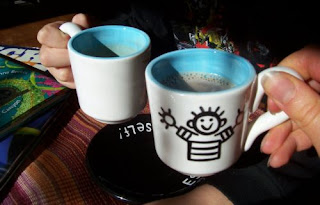 Posted by shannonmarie at 3:15 AM

is that some sort of weird spidey hat?

No, it is actually just a basic Spiderman ski-cap. He's just looking down, so it appears to be his masked face. He's my little mystery man.