The rumors were true. They were married by Elvis, and then he gave us all a show. He even serenaded me (not the best picture ever, but hey, he was on the move). I don't think we ever had this much fun at a wedding. 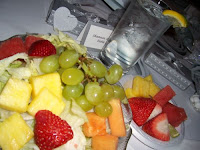 And, to top it all of, I didn't starve. In fact, I actually ate pretty well. They had a ton of salad (iceberg lettuce, but still a raw veggie), and lucky for me, the guests barely touched the fruit trays at cocktail time. I filled up on both, and my family took extra for me (in exchange, they ate off of my main meal, which was far from raw or vegan).

I also tapped into my secret stash (yes, I did stock my purse, just in case). I had raw veggies and some leftover Santa cookies (which freeze well if you make more than you can eat in a particular time frame; mine are officially gone now). I ate the veggies alongside my salad, and tried to save the cookies for dessert (obviously that didn't happen; not a crumb was left by the time they cut the cake). 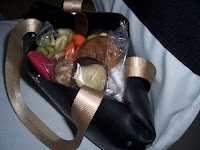 It was easy to be discrete about feasting on my own food, since I was seated with my family (who all knew about my eating habits). I didn't have to answer so many questions about my diet, and I don't think anyone outside of them even noticed.

The dim lighting really helped the situation. The room looked like Christmas all over again with decorated trees and other holiday lights. 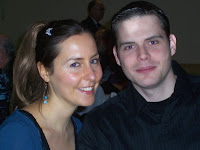 Unfortunately, it made picture taking a little more difficult. Somehow, I actually got a fairly decent photo of my husband and I, courtesy of my mom. I tried my best to fix the red eye, but gave up in the end. I guess we'll just look like vampires.

Which reminds me. I also have a photo of my family (I won't post it, because they probably wouldn't like it if I did) at the event, where everyone looks like creatures of the night ... well, everyone except me, the "golden child."

My family is always pointing out my unusually tan coloring, but I never really noticed it myself until last night when I was going through the wedding pics. I almost look like I am glowing. I thought about posting the family photo as a "Where's Waldo"-like can you spot the raw foodie in the group thing, but instead, decided to keep this one for personal viewing.

I was just mentioning this (my veggie-based "tan") to Phillip the other day. You really should check out his blog. He is a true inspiration, not to mention a really nice guy. You can also find him on Give It To Me Raw.

Another friend of mine on the site is Jenny (she has a blog, too), who shared her recipe for chocolate macaroons with a surprise cherry on the inside. I plan on making them for my raw chocolate new year.

I got the idea from NaturalZing, which is having a New Year's Eve Chocolate Bash. Here are the details if you're interested:

Since I won't be able to make it, I decided to recreate the experience with my own chocolate celebration. I plan on starting off with some raw chili, enhanced with a little raw cacao, and snacking the rest of the evening on the macaroons and some mint chocolate brownies, a recipe I "rawified" using more leftover raw icing (I make this icing a lot; I also used it to make some candies). I even have some chocolate mint Teeccino to wash it all down.

I'll post more about my chocolate plans, along with my raw resolutions, tomorrow. What are your plans, and what have you resolved for the new year?
Posted by shannonmarie at 5:58 AM

OMG! I must have remembered about Natural Zing's Chocolate Bash subliminally (or something)...I recall seeing it now...and for the past couple of days I've been planning my own little chocolate ecstasy New Year's Eve party (with raw vegan wine, of course!) not even knowing how I came up with the theme. LOL

A toast to you, love, and may all our chocolate yummies be extra good that night and all year long.

Hey, girlie girl. We must have been separated at birth. We are the same age. Hey, when is your birthday?

Enjoy your taste of chocolate heaven. I'm already loving mine.

A toast back to you, wishing you the best all year and in years to come.

"the golden child" hahahah I'm really dying from laughter!! :D I am trying to read your old posts in order to get a clear(er) idea of what "going raw" means. Yesterday, while I was having dinner with my partner, I told him about you, your blog and raw food (he ignored that some people go raw). He asked me questions which I could not answer. It is a thorny topic for those, like me, who are not expert.

Hi BeautyRo. I'm surprised to see you were able to comment on an old post. I switched to Disqus a long time ago, but when I revamped my blog, Disqus was removed. I can't get comments on the newer posts, although the old ones work via blogger. I haven't tried reinstalling Disqus, because I guess I've just been too lazy.

Anyway, it's good to know you're reading this. I'm not 100 percent raw these days. I still can answer a ton of questions, since I did it so long.

On another note, I'm so impressed with how you take the time to post in two languages. Very cool and much appreciated.

Oh I haven't tried to comment on the newest ones because I was trying to dig out some information which, I guess, was to be found in the old posts. :) Thank you, it is nice to know that someone appreciates my effort (even if I am supposed to speak/write much better in English: I am PhD in English-Italian translation, but translation if a different matter and it does not necessarily implies that one is mother-tongue speaker of the language they are translating from, that's why). Anyway, three languages, actually! :D There is also a post (and more are yet to come) in German!

Three languages is amazing. I'm very impressed. I took some French and Spanish in school (years ago), but since I never got to use it in a real world setting, I lost most of it. I wish Americans, like myself, made more of an effort to learn other languages.

Oh it's not really just Americans: you should see how Italian are rarely (and poorly) gifted for foreign languages! I have been studying German and English for years so it's almost obvious that I can - at least - communicate. I also studied Spanish and became fluent when I met a Mexican boy who became one of my best friends. Learning a foreign language is often boosted by feelings, no matter what kind. Your should find your "feeling" to go on with the study! You can do it, I'm sure! :)

Maybe I'll try learning a new language when the kids go back to school. It's summer break, so it is amazing that I'm even finding time to blog, instagram, etc. That's probably why it's more instagramming than blogging.

Yes, it would be nice! Or you could do this with your kids! :) Especially your little girl is in the right age to learn a new language (right now she has the possibility to become mother-tongue speaker of another language - I guess she is under 5 - their brain is flexible to the point that they can easily acquire - more than proficiently - an incredible number of foreign languages with no efforts!). Ok, I'll stop, I am a language freak! :D