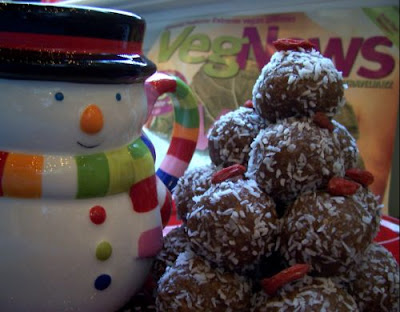 Does anyone else out there feel like they have a holiday hangover? I'm not talking about the kind caused by too much alcohol-laden eggnog; I mean the feeling you wake up with after all this celebrating, eating heavier foods (not to mention improper food combining) and lack of sleep. Thank goodness I took off from work today.

But, I am not going to complain. I've had a lot of fun leading up to the homestretch, experimenting with raw recipes in my kitchen, sampling my creations, sharing them with others, and spending time with my friends and family. To top it all off, I get to relax at home today with my two boys (husband and son).

My plan is to stick to lighter meals, like green smoothies, fresh fruits and veggies, maybe a kale salad and some soup. I need to give my digestion a brief hiatus before bringing out the new year's treats (I had hoped to go to NaturalZing's raw chocolate event, but instead will be recreating it here).

Don't worry; I won't let these next few blog posts bore you. For instance, today I'll tell you about the Banana Nut Donut Holes (another version of these raw donut holes) I made for Christmas brunch yesterday. Ani Phyo (love her) included them in her latest contribution to VegNews magazine (she actually provided nine recipes in her food feature, and there was an entire article about the raw food movement entitled, "Raw Revolution").

Here is the recipe for these tasty morsels: 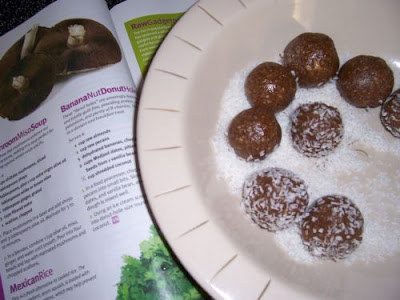 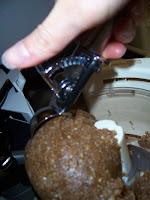 In a food processor, chop almonds and pecans into small bits. Slowly add bananas, dates and vanilla bean, and process until dough is mixed well.

In the spirit of the holiday, I stacked mine up like a tree (similar to the monkey bread my mom makes on Christmas morning, yet another recipe I plan on "rawifying" soon). I also gave them a sprinkling of goji berries for color and served them with some Teeccino, an excellent coffee alternative.

The donut holes were a hit with the women in the family. My grandmother even asked for the recipe.

Speaking of recipes, I'll be posting the ones for my Christmas cookies tomorrow. Be sure to stop by.
Posted by shannonmarie at 6:59 AM

Those look delicious!...I'm also still laughing at the thought that I'd stumbled across my first raw polygamist blog. :-)

mmmm. i tried these with dried pineapple awhile ago and they were delicious!
and i'm really looking forward to what you come up with for a raw monkey bread as I used to adore this when i was little!
x

Ahhh, those cookies... I want MORE! The last cookie in the tin didn't quite make it home! And those doughnut holes from aniphyo... why couldn't you have come to work today?? Then you could have brought me leftovers. Bummer.
I had a lot of raw food for my meals over the holidays, but also had small samplings of everything wrong, too. This has not agreed with my digestion and it feels like things have just plain shut down. Now that's incentive to keep things raw and simple, isn't it?
Did you see that you're once again listed on the WeLikeItRaw Quickies??

melissa, you crack me up. For those of you who missed it, she was nice enough to catch an error in a past post for me. No, I am not really part of a polygamy.

wyldegirl, I've had these with dried pineapple, too, but I think I actually preferred the banana. As for the raw monkey bread, I guess I'll need to attempt it soon. In the meantime, I saw a new recipe on Gone Raw that has come close. It's called Cinnana Treats.

Hi Rawbin. Sorry I wasn't at work yesterday, but I wouldn't have been able to share the donut holes. They were too big of a hit with my family (which is a good thing).

I hope your tummy feels better. Stick to the raw thing girl. Yes, I saw I was on there again, but thanks for pointing it out :-)

Can you tell me how to dehydrate bananas for this recipe? Thanks. Maybe I can just get the raw ones in the bulk section of my local coop. There are the banana chip ones and the softer ones.

Hi Lynn. To dehydrate bananas for this recipe, I just chopped bananas into chunks and put them in the dehydrator until chewy. If you buy them in the store, select the soft ones that only contain bananas. The chips have oil, salt, etc., and won't work for this recipe. You are lucky that your store sells the soft ones. Most stores only carry the chips.