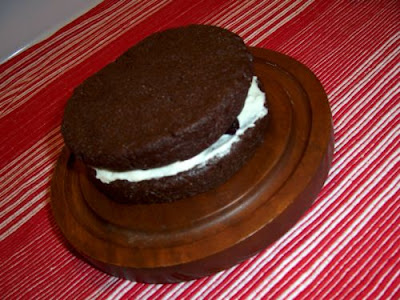 A whoopie pie, of course. You must have just read Kristen's most recent post, too.

I was looking back at the pics I took yesterday while making my cake and realized that the pre-iced dessert resembled a whoopie pie. 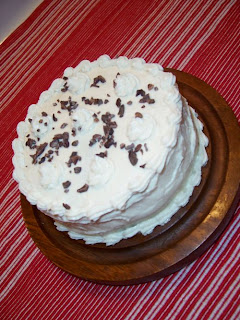 Well, this "uncook" likes to experiment, too. My cake, which happens to look like a whoopie pie, may be chocolate, but it doesn't contain butter or shortening. The cake itself is made of almonds, walnuts, dates, prunes, cocoa powder, vanilla, sea salt, cinnamon and cayenne (I need to spice things up a bit, it is a "whoopie" pie ... sort of).

The fluffy white filling in the middle was the whipped cream frosting leftover from my gingerbread house (still no sign of butter or shortening). It was a blend of raw cashews, coconut milk (2 parts water to 1 part coconut), agave, vanilla, sea salt, raw coconut butter, raw cocoa butter (I adore this stuff) and lecithin.

I also sprinkled in some dried cherries as a surprise in the center (I like surprises). I even added some to the top after I took this finished cake photo (it looks like a Friendly's ice cream cake), which does have raw cacao nibs on it (chocolate really does make the heart grow fonder).

I guess I can make smaller versions of this naked (I meant to say, non-iced) cake in the future to eat like the original whoopie pie. It would make a great snack on the go.
Posted by shannonmarie at 6:31 PM

you and kristen are incredibly sweet. . thank you :)
stealing beauty is one of the most perfect (and subsequently most watched by me over the years!) movies on my list, and the soundtrack has been on constant rotation in my life for over 10 years. . . wow.
your posts are THE most mouth-watering and tempting. . . i'm going to try this one now- perfect for a snowy and darkening winter afternoon with no sign of letting up to venture on the roads- snowbound with raw whoopie pies. mmmm
x

. . . and they're an old Maine treat. . . so i'm being a bit revolutionary and yet traditional by making them RAW!

Hi Gorgeous :)
Love this post (all of your posts actually)! You're awesome.

I'm not familiar with Stealing Beauty, but am intrigued now...can't wait to check it out.

Jenny, I totally love that movie, too. I used to watch it all the time in college. I'd love to visit where it was filmed. It's so beautiful.

I also still play that soundtrack on a regular basis. It has such a great mix; It's very sultry.

Kristen, I know this movie is right up your alley. I'm surprised to hear you haven't seen it already, especially with your love of cinema.

Your latest post has me curious about "Juno." It has an awesome cast. I'll have to make myself a whoopie pie (I think I've started a trend) and watch it.

Happy Holidays to you both :-)