What to do with left over icing? 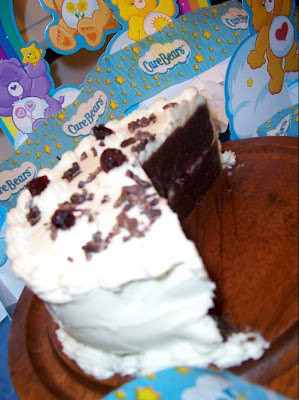 Celebrate all over again :-)

I've just returned home from yet another birthday celebration for my son, but this time it was for his cousin, too. We had a combined party at my in-laws house.

Here is what is left of my raw cake. I actually had a curious taste-tester, who really liked the icing. It was leftover from my gingerbread house; I wasn't going to just let it go to waste.

So, I opted to make another "15-minute" (give or take) cake, enabling me to partake in the festivities. My mother-in-law hates it when I don't eat cake and ice cream with everyone else (despite this comment, we happen to get along rather well). She thinks I'm depriving myself or something.

But, there was no deprivation tonight; I helped myself to a more than sufficient slice. I am so full; good thing I just had raw soup again for dinner.

The rest of the crew had pizza, which I originally planned to make and eat alongside them. There have been a lot of recipes floating around lately, so it would have been easy to come up with a raw version.

My fellow raw bloggers also have posted their pizzas. Check out Derek and Sara's (this site has beautiful photography; it makes me want to take a class), Heidi and Justin's (if you haven't already seen their pizza post) and Jess Michael's (hers was published in a magazine). There are even forum topics dedicated to finding the best crusts and showing off photo-worthy results.

But, alas, I did not make any of these recipes for tonight. Since I made such a "heavy" cake for dessert, I decided to forgo the dense crust and nut-based cheese topped Italian treat and quickly whip up my lighter standby soup (which did have Italian seasonings, by the way).

It wasn't until after the fact that I recalled how I have thrown together a veggie-based (literally) "french bread"-style version in a hurry. In the future, I'll remember to use a long slice of zucchini or eggplant as my "crust" and replace the nut cheese with some raw Parmesan (ground sesame seeds and nutritional yeast). You should try it sometime.
Posted by shannonmarie at 6:29 PM

that cake looks SO GOOD!

your blog is FANTASTIC, i don't know how i missed it for so long! and finding it is just another bonus of this rapidly growing, positively energetic raw community (thanks to dhru on welikeitraw and giveittomeraw!!!)
I had been musing on raw gingerbread houses, and you've completely inspired me to go for it, great ideas and testing already done- how perfect is that?!
In much gratitude and adorableness always,
x jenny

And, thank you jenny, too. You didn't miss my blog for very long; I've only had it for about a month and a half.

I'm surprised that I've had this many visitors so far, probably due to Dhru (he's had me on his Quickies page twice in addition to the main page). We Like It Raw and Give It To Me Raw really help bring the raw community together.

Definitely try your hand at making a raw gingerbread house. I hope you have as much fun building and eating it as I have (mine is already in my tummy; I had to document it on my blog because I knew it wouldn't last long). Good luck :-)

Philip, your raw cooking isn't too shabby either. I've checked out your blog on a regular basis.